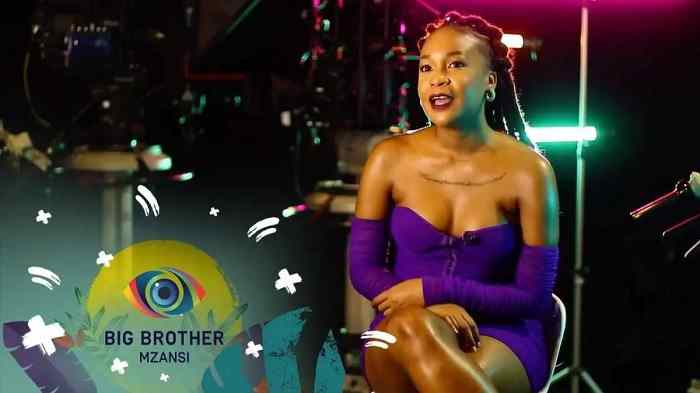 One of the contestants in the ongoing reality TV show in South Africa, Big Brother Mzansi has left the house just after 48 hours.

On Wednesday morning, Keamogetswe Motlhale (23), known as QV, announced that she was leaving the show due to mental health reasons.

This was after Monday’s session in which housemates were required to “wear their hearts on the sleeves” and share their upbringing, so they could know each other.

Following a stream of emotional stories and tears, it was QV’s turn. After a huge sigh, she rubbed her hands and then rested them on the cushion of top of her thighs. “Give me a few seconds guys.”

When she finally spoke, she shared her childhood trauma in a shaky voice, almost holding back tears. “Before the age of seven, I had already experienced sexual abuse from three different men. I am going to talk about one in particular, because [then], I guess, you guys will better understand who I am.”

She shared that her mom had been a travelling woman and was hardly home, so she stayed at home with her stepfather who was also working. She was required to go to a friend’s place every day after school.

“This friend of mine had a brother, and he was 19 at the time. I remember this vividly. Every day when I came back from school, that guy would rape me.”

She further explained that, as a child, she’d steal money a lot, and one day she had stolen R100 with the intention of running away and spoiling herself.

Little did she know that she’d get a hiding from her mother who, at the time, did not know what was happening. QV said that incident had made her resent her mom for years until she opened up about her trauma when she was in matric.

Her story left many hurt to the core.

After Monday, QV seemed a bit distant, and found it hard to make connections and be herself around the Big Brother house. She then took a decision to leave the show to deal with her mental health.

The 23-year-old from Mahikeng said her emotional goodbyes on Wednesday morning, which left many shocked but in support of her decision.

She gathered all the housemates and said: “I am going to need to speak to somebody who I am safe with. If that’s professional work, then yes. Unfortunately, I cannot do that with you guys here.

I have spoken to Big Brother; he advised me to give it 24 hours. I tried and it just keeps on getting worse. The longer I am here, I feel there is a need for me to address it quickly outside the house.”

In conclusion, she wished everyone the best of luck as they continued with the journey.

She said: “It was lovely meeting everyone. All the best to every single one of you. Love you.”

Housemates were left emotional, even though most of them had nominated her to leave the house this coming Sunday. What they did not know, though, is that the nominations were fake.

On Tuesday night, the gents held a “men’s conference”, with some of them confessing their attraction to QV, to which Norman said she was the only lady he’d go for in the house. Themba dismissed it by reminding them that QV was still emotional and vulnerable.

Viewers are still waiting to see why the nominations were fake.

The channel had not released a statement later.