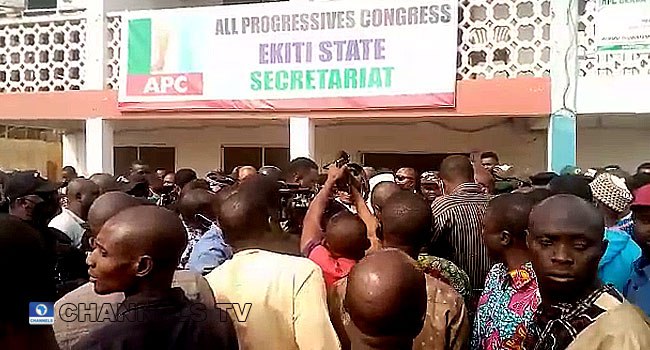 Seven governorship aspirants under the All Progressives Congress(APC) have called on the party to cancel the primary election of the party scheduled for today in Ekiti State.

The aspirants, Kayode Mojo, Demola Popoola, Femi Bamisile, Bamidele Faparusi, Dayo Adeyeye, Opeyemi Bamidele and Afolabi Oluwasola on Thursday alleged that the primary election committee is made up of loyalists of the state Governor, Kayode Fayemi.

The Governorship aspirants of the ruling party claimed that Fayemi has plans to impose Biodun Oyebanji as the governorship candidate of the party in the forthcoming election.

The statement reads, “The seven aspirants herein received with rude shock and dismay the purported list of the local government election committee and ward election committee made up solely by party members and political appointees that had before now openly endorsed the candidacy of Biodun Oyebanji the immediate past secretary to the state government.

“It is on record that the government of Governor Kayode Fayemi has given its unwavering support to the candidacy of Biodun Oyebanji, it is common knowledge that the Governor and most appointees of the governor are openly rooting for and supporting Biodun Oyebanji’s aspiration to become the flag bearer of our great party.

“What is more disturbing is the fact that a simple glance at the names of the persons appointed as members of both committees would reveal that it is made up of appointees of government who are all supporters of a candidate in the primary election they are appointed to superintend on.

“The seven candidates herein are loyal, faithful and committed party members who are sincerely concerned about the chances of the party in the forthcoming 2022 governorship election where imposition is allowed to override a Democratic primary election for determining its flag bearer.

“We request that both the local government election committee and ward election committee that was constituted on the list already in circulation be disbanded and replaced with names that would reinforce internal democracy and uphold the aims and objectives of the party.”

This is coming after the lawmaker representing Ekiti Central senatorial district, Opeyemi Bamidele, called on the APC to cancel the primary election of the party scheduled for today.

Bamidele in a statement released on Thursday alleged that the people on the primary election committee are aides of the state governor, Kayode Fayemi, who are working to ensure that Biodun Oyebanji, a governorship aspirant, gets the party’s ticket.