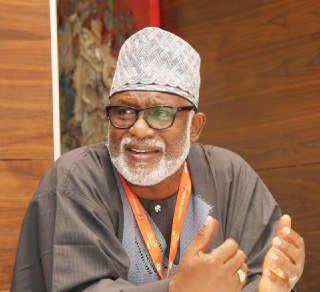 The CNG is foolish and deluded, according to PANDEF, for targeting Gov. Akeredolu over his comments on the 2023 presidential election, which he claimed must be allocated to the south since the area will not support any northern candidate or the party that fields one.

According to Anaedoonline.ng, Rotimi Akeredolu, the Governor of Ondo State and Chairman of the Southern Governors’ Forum, has vowed that any political party fielding a northern candidate in the 2023 presidential election would lose.

The Governor spoke on Tuesday in his office in Akure, Ondo State’s capital, when he hosted members of the Power Rotation Movement, which is led by Dr Pogu Bitrus, who also serves as Chairman of the Middle Belt Forum.

However, the Coalition of Northern Groups (CNG) has chastised Ondo State Governor Rotimi Akeredolu, who also serves as Chairman of the Southern Governors’ Forum, for his remarks on the Northern presidency.

Governor Akeredolu, according to CNG’s spokesperson Abdul-Azeez Suleiman, is a danger to democracy, and his opinion is meaningless and worthless.

Suleiman claimed that Akeredolu’s threat is yet another effort to trespass on political parties’ basic rights to field candidates of their choosing, as well as voters’ freedom to freely choose who leads them.

He said that the North would not be coerced, harassed, or blackmailed into relinquishing political power, which he believes should be decided democratically through elections.

Ohanaeze, PANDEF, Afenifere Warns FG Over The Level of Insecurity In Nigeria

The CNG statement labeling Akeredolu as a menace to democracy, however, did not sit well with PANDEF, who concurred with the Ondo Governor and insisted on a southern president for 2023 in their own reaction.

PANDEF’s response is included in a statement signed by Ken Robinson, the organization’s National Publicity Secretary.

It told CNG and other groups to accept the truth that a northerner should not succeed President Muhammadu Buhari in 2023.

“How can any sane person refer to Governor Rotimi Akeredolu as a threat to democracy? Do they need to be apprised of the credentials of Mr Governor? the statement questioned.

“PANDEF wholly backs the statement of the Governor and restates the resolution of the Southern and Middle Belt Leaders’ Forum at its meeting of January 13, 2022, that any political party that fields a northern candidate should not count on the support of the four regions in the 2023 presidential election.

“Why is it difficult for people to accept the truth? It is simply unthinkable that anyone would consider another northern presidency after President Muhammadu Buhari’s eight years.

“Organisations like the so-called Coalition of Northern Groups seem incorrigibly apathetic about the peace, unity and stability of Nigeria. They have, by their utterances, presented themselves as assemblages of unpatriotic individuals, who, perhaps, benefit from the inglorious goings-on in the country.

“PANDEF urges these groups to strive to appreciate the true tenets of democracy and stop the hallucination. The north should not and cannot retain Nigeria’s presidency beyond 29th May 2023, in the interest of national harmony.”

PANDEF added that the demand for zoning is about the future and peace of Nigeria, saying a southern presidency in 2023 will guarantee peace, fairness, justice, and equity.

“Defining the just and rightful demands for zoning and power rotation as threats and blackmail is a logical fallacy. Nobody is threatening nor attempting to intimidate anyone; the South, and other patriotic Nigerians who are concerned about the future of Nigeria, are simply insisting that the fundamental principles of fairness, justice and equity must be respected and upheld in the power equation of Nigeria.

“Let’s remind the said Coalition of Northern Groups and their sympathizers that the appropriation of rights by any section of the country must be measured against the rights of the others. Undoubtedly, no group or section of Nigeria can arrogate to itself or colonize the presidency of Nigeria,” it added.