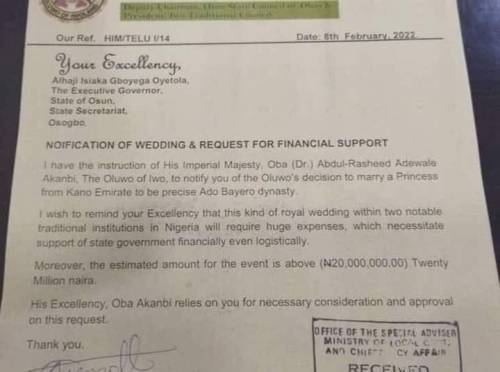 The Oluwo of Iwo, Oba Abdulrasheed Akanbi, has written to the Government of his state and state where his kingdom is domiciled in, Osun state, requesting that the governor of the state should donate to his planned state wedding that is expected to gulp over 20 million naira.

The letter, which was addressed to the governor, Dr Gboyega Oyetola, stated that the traditional ruler has planned to marry a princess from Kano state, the Ado Bayero family, precisely, which is the family of the paramount ruler in Kano state. 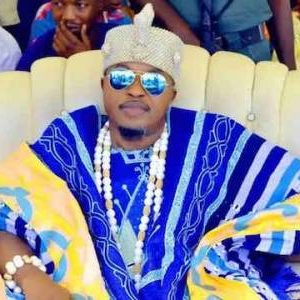 The marriage to Ms Chanel Chin lasted for about four years, and both were said to have met in Toronto, where they lived and eventually got married in November 2015, upon the monarch’s assumption to the throne.

Meanwhile, while Oluwo accused Ms Chin of recording their bedroom activities the ex-queen accused her former heartthrob of deceit, extra-marital affairs and paedophilia.

The marriage produced a memoable fruit, in the person of a son named Oduduwa.

The government of the state is yet to respond to the “Kabiyesi’s” request.

Tragedy Averted As Car Veers Off, Lands In Jabi Lake