Do you, your spouse and/or kids like taking Capri-sun drink, this gist is for you; Capri-sun, as a soft drink, has reportedly had adulterated ones?

The orange juice, which was once known as Capri-sonne, whatever changedthe name to capri-sun is unknown, has reportedly flooded the market by its producers with adulterated form, which is said to be infested with dirts.

A woman identified as Mrs Suleiman took to her Instagram handle to share the video, followed by responses from other handlers who have also observed the anomaly.

Mrs Suleiman explained that she made the video to save other parents from giving their children poison. 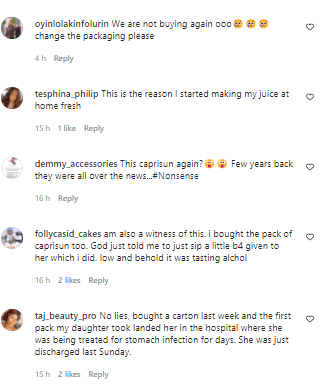 Tonto Dikeh Lashes Out At Former Client, Accuses Him Of Duping People