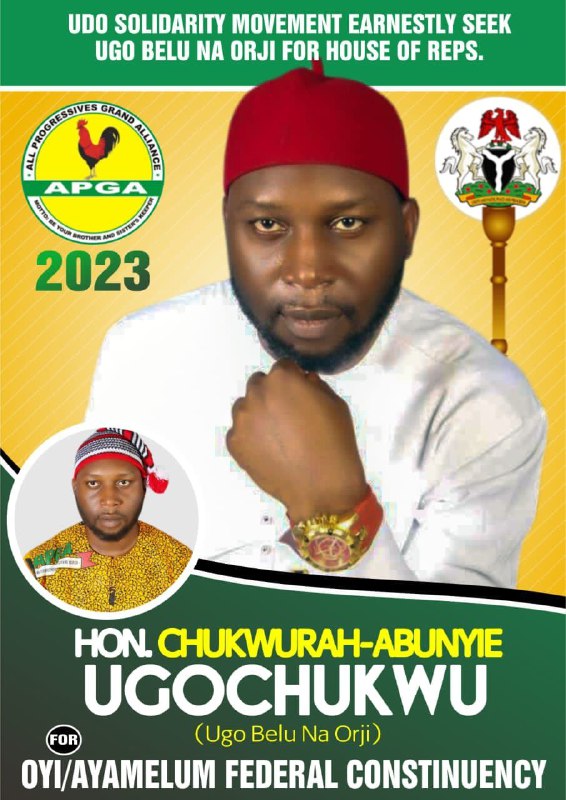 As the search for who the cap fits in Oyi/Ayamelum Federal Constituency ahead of 2023 General election intensify, the stakeholders and leaders of thought had once again shown leadership and direction with their reiteration on zoning. Last week, the stakeholders of Oyi and Ayamelum Local Government Areas were forced to convene a meeting of critical stakeholders, religious and community leaders, and entire political creme la creme at the instance and at the Royal Palace of Igwe Kris Onyekwuluje of Umunya in Oyi LGA; decisions were reached and sealed by voice votes to allow Oyi Local Government Area to produce the next Representative of the Federal Constituency in respect to the existing Zoning understanding between the two sister LGAs.

The meeting had in attendance, both past and present Representatives of the Federal Constituency and notable aspirants vying for the coveted seat. High point of the meeting was the unanimous agreement that only Candidates from Oyi would be supported at the General election regardless of their political party.

For years, the Representative seat of Oyi/Ayamelum had been a benefit and take home for some political retirees who always run to the Lower chambers of the National Assembly to massage their ego and stretch weak foot and are redundant at the Hallowed Chambers at the expense of teeming young people of the Federal Constituency. None has made any known effort to change the ugly history of Oyi and Ayamelum through legislation and engagements in robust Bills and law making.

The zoning arrangement which is to afford the two sister LGA equal opportunity to contribute to the growth and development of the Federal Constituency and Nigeria at large.

Looking at the aspirants who have already indicated interest to Represent Oyi/Ayamelum Federal Constituency from Oyi Local Government Area whose turn it is according to zoning. Only one seem to stand out and with the requisite for Paradigm Shift from the old order.

Chukwura-Abunyie Ugochukwu seem the real deal and change agent that will launch Oyi/Ayamelum to limelight. He is young and enterprising; coming from the corporate world as a successful business tycoon and development expert with litany of corporate world experience.

Chukwura-Abunyie Ugochukwu hails from Akwuzu in Oyi Local Government Area and a member of the All Progressives Grand Alliance Party, APGA.

He has remained a loyal party man with visible support to the APGA party at various levels and the last being the 2021 Gubernatorial election victory of Professor Charles Soludo CFR.

Chukwura-Abunyie Ugochukwu has remained committed and consistent in his intentions for Oyi and Ayamelum. It seem the time has come for the young Business developer to reap the value of his years of service, loyalty and contribution to the APGA party by clinching the ticket and flag of APGA to Represent her at the General Election.

There’s No doubt in his capacity and strength to win the election for APGA having played significant role at the grassroot level for years now and very popular amongst the party hierarchy, faithfuls and entire electorates in both Oyi and Ayamelum. Being a young man below 50 years and innovative are yet again, another plus to his long list of qualities.

Globally, younger leaders are more likely to challenge the way things are done and push for improvement. They are results-driven and focus on the need to achieve their goals. It’s on this that Chukwura-Abunyie Ugochukwu is putting his foot forward to lead a paradigm shift in Oyi/Ayamelum Federal Constituency to change the narratives.
Years of bad Representation has driven many to the extreme of fighting for survival whilst the worn out political kidnappers recycle selves to continue their retirement tourism at the National Assembly for Oyi and Ayamelum.

The paradigm shift will be to retire completely those who had over the years subjected ndi Oyi and Ayamelum to mere spectators to our own destiny.

If APGA must win and dislodge the incumbent APC or other opposition parties come 2023, they should be intentional by allowing free and fair contest where the likes of Ugochukwu will put his capacity to test for the party’s flag and not ceding her ticket to same worn out leaders hoping to proceed to Abuja for political retirement and tourism at the expense and future of Oyi and Ayamelum Federal Constituency.

Obiano Vision 2070: Anambra Will Be Better Than  Dubai – Monarch

Anambra: See Full List of Appointments Made By Governor Soludo