Nigerians Reveal Who Can Challenge Osinbajo For 2023 Presidency 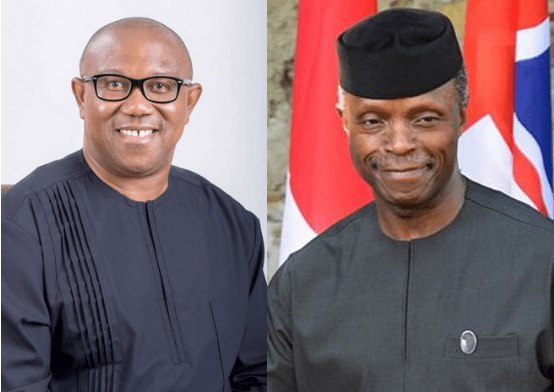 As Vice President Yemi Osinbajo enters the race for President of Nigeria in 2023, a discussion has erupted online about who Nigerians would elect as the country’s next leader.

Yemi Osinbajo, Rotimi Amaechi, Asiwaju Bola Tinubu, Yahaya Bello, Dave Umahi, and Rochas Okorocha have all declared for the president under the All Progressives Congress, APC.

See How Nigerians Reacted As Peter Obi Declare For 2023 Presidency

One of these individuals will very certainly become the next President of the United States.

While the PDP struggles to decide where to zone the presidential ticket to, some Nigerians have opined that Peter Obi is the best candidate to go against Yemi Osinbajo if APC decides to give him the ticket.

@Nerfetiti “Wike, Atiku, Saraki or Tambuwal cannot win. 2023 is the crossroads. The first time the church and elites will be voting. The RCCG, House On The Rock and Winners are cooking. They’ll be voting massively this time. Should the church endorse Osinbajo or any candidate, PDP will be toast.”

@Chuksudi “If Peter Obi grabs the ticket, trust me people are going to massively vote for PDP. Peter Obi is there only hope in getting back to Aso Rock.”

@Mavoromatthew “The only person in PDP that can face Osibanjo is Peter Obi. If APC picks Osinbajo and Peter Obi is not contesting, landslide victory for APC.”

@Jeffphilips1 “As at today, Atiku cannot beat Osinbajo in any election, Atiku is unelectable as president of Nigeria. I don’t know how many times you people want me to repeat this.”

@Lawyerwaffi “Any youth who votes Atiku or Tinubu over Osinbajo or Obi is an enemy of the state.”

@Odunolasoji “If PDP maintains this position, I can only see Atiku emerging as their candidate, maybe Wike coming a distant second. Peter Obi won’t even come close. And if that happens, they just lost their chance to survive against whoever APC is bringing to the table.”

@MercyUzoho1 “These churches better don’t give APC that opportunity.It’s best if the winner comes from an unknown party. Ain’t you guys tired of PDP and APC? What good do we think we’ll get out of them again? Let’s be wise in our decisions come 2023.”

@Adeyemiaio “The North is playing a long game, if they give osinbajo the ticket, apc will collapse. Then PDP will probably field Atiku (Peter Obi won’t get anything Shar) Atiku will win and the power goes back to the North. Party line is rubbish, ethnic line is the real deal.”

@Ella “God please give us Osinbajo vs Peter Obi in 2023. We’ve suffered too much as a country to have Tambuwal, Atiku, Saraki or Tinubu as President.”

Osinachi’s Death: See What Pastor Enenche’s Daughter Said About Death of The Singer