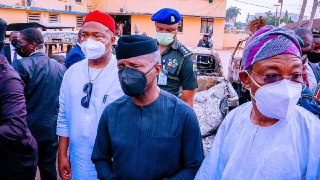 The All Progressives Congress (APC) in Lagos State claimed on Tuesday that Yemi Osinbajo never informed the party leadership before transferring his membership to his home state.

Yemi Osinbajo, the vice president, is said to have abandoned the Lagos State branch of the All Progressives Congress (APC) in favor of his home state.

In response to the news, the Lagos APC’s Publicity Secretary, Hon. Seye Oladejo, informed Newsmen that they were unaware that Osinbajo had relocated his membership to Ogun state.

He added that no official communication of Osinbajo’s movement has been made to the party in Lagos.

“We are not aware but if they are claiming that he has moved his voting unit to Ikenne in Ogun state, so technically he has to be a member of the party in Ogun now. But no official communication from him was received by the party of his movement to Ogun state,” he said.