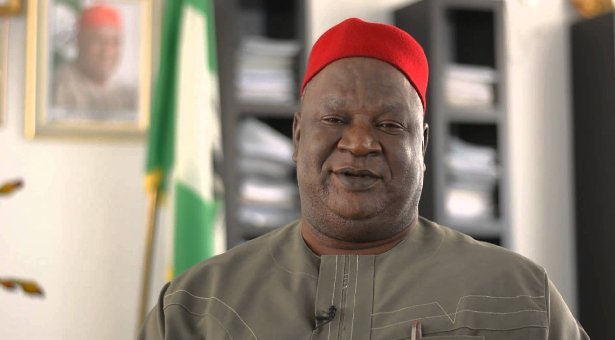 According to Anaedoonline.ng, Samuel Ortom, the Governor of Benue State and Chairman of the PDP 37-man zoning committee, gave his report on Tuesday.

Anyim made the remarks immediately after filing his expression of interest and nomination papers at the PDP office in Abuja on Wednesday, urging the party’s leadership to defend Section 7 (3) (c) of the constitution.

“If I stand before you today without addressing the boiling zoning problems in our party, my proposal will be incomplete,” he added.

“As a true party man, I will abide by the decision of the party. However, I would want to put the following on record: Democracy thrives on three ‘certainties’: Certainty of tenure, Certainty of structure, Certainty of process, Anyim added.

The former Secretary to the Government of the Federation (SGF) hinted that at anytime any of these ‘certainties’ is no longer guaranteed, democracy will corrupt justice and enthrone inequity.

“Accordingly, my appeal is that zoning being a fundamental principle of our party should not be jettisoned, he added.

Anyim also noted that democracy, being a system of rules and order, depends on strong institutions for its sustenance and success, saying ” when a system can no longer defend its rules, it will enthrone the reign of might as against the rule of law”.

In his brief remarks, the PDP National Chairman, Dr Iyorchia Ayu assured that the party’s presidential primary slated for 28th and 29th May will be free, fair and credible.

He said, ” I want to assure you that the party primary will be free, fair and credible. The ordinary members of our party will decide who the PDP 2023 Presidential election will be”.

Anyim also expressed hope that the 17 Presidential aspirants jostling for the PDP’s ticket will accept the outcome of the primary.