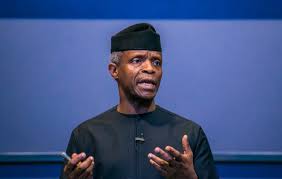 Yemi Osinbajo, the Vice President, has been requested to resign from his position.

Former Deputy Head of State Ebitu Ukiwe resigned after former President Ibrahim Babangida chose to register Nigeria as a member of the Organization of Islamic Cooperation, according to Omokri.

In the midst of the deaths of Christians and the burning of churches in the North, he bemoaned Osinbajo’s inability to stand up to Buhari.

In a series of tweets on Saturday, Omokri wrote: “You ask what I expect Osinbajo to do over Buhari’s failure? Ebitu Ukiwe was vice to Gen Babangida. When IBB applied for Nigeria to join the Organisation of Islamic Cooperation, Ukiwe opposed it. When IBB insisted, Ukiwe resigned. Ukiwe fears God more than Osinbajo!

“Those saying Osinbajo cant say anything when Christians are killed and churches are destroyed in the North under Buhari, because it’s religious, have forgotten that both Buhari and APC unashamedly used Osinbajo’s alleged pastoral position to campaign in 2015 & 2019!”