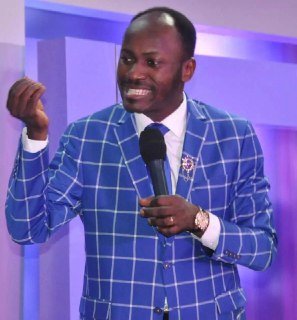 Apostle Johnson Suleman, a well-known Nigerian pastor and the founder of the Omega Fire Ministry, has spoken out against Igbo discord.

According to the cleric, Igbos do not support themselves and will openly degrade themselves at any given occasion.

He went on to say that if they succeed in establishing Biafra, it will be an Igbo man who will destroy it.

VIDEO: How My Spiritual Son ‘Supernaturally Landed In France From Germany’ Without Ticket – Apostle Suleman

Suleman mentioned the rise of an Igbo Senate President, Evan Enwerem, who was overthrown by another Igbo, Chuba Okadigbo, who was succeeded by Anyim Pius Anyim.

Anyone who is cold-blooded enough to sell his sibling will not be trusted, according to the preacher.

According to him: ‘’Somebody from the South, somebody from the East. You betray your people. Look at this agitation for Biafra. Who are the people attacking Biafra most, Igbos. Shameless Igbos.

“If today they get that Biafra, it is an Igbo man that will scatter it. That is the truth.

Apostle Suleman: Why I Prayed Coronavirus Pandemic Should Not End

“During the time of the Senate. When an Igbo man became a senator, it was an Igbo man that removed him. You remember the Enwerem, Chuba Okadigbo, Pius Anyim…remember all of them? It was Igbo that was removing Igbos. That was the first and shortest Senate Presidency we have had in this country.

“An Igbo man employs an Igbo boy to sell in his shop, he will wreck him. He will carry all the man’s money, he will buy land. He wouldn’t wait to be settled.

“The problem of Igbo is Igbo. I repeat it, if you sell your brother, even the buyers will not trust you.’’

Chrisland Reveals How Many Students Involved In S3x Scandal