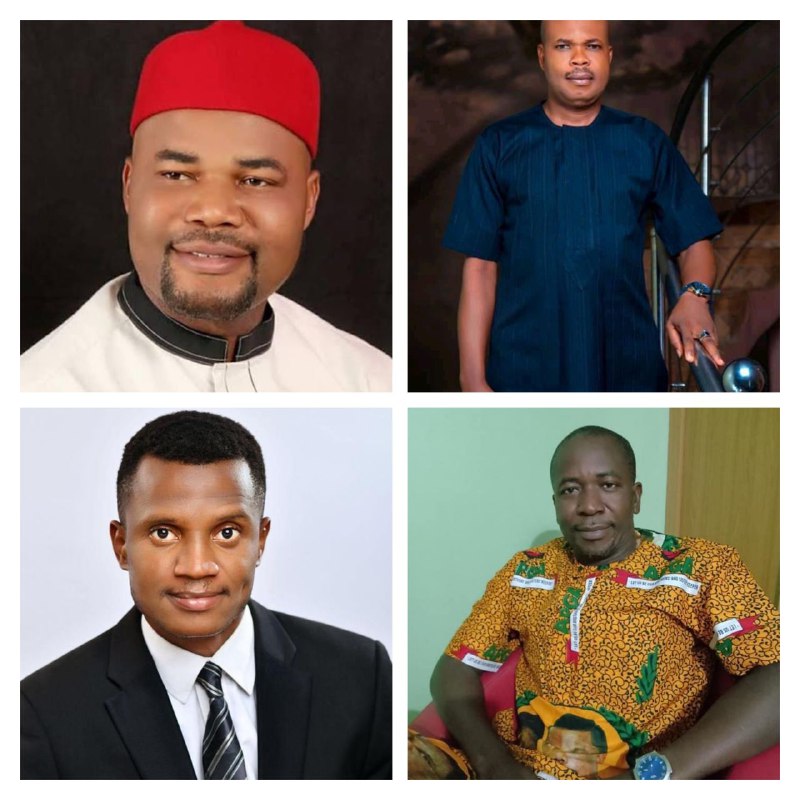 The battle for who will represent Nnewi North in Anambra State House of Assembly is gathering momentum among members of All Progressive Grand Alliance (APGA).

In what promises to be an intriguing and titanic battle, aspirants within the party are intensifying grass-root campaign to outwit one another in getting the ticket to contest on the platform of the party.

The upcoming party primaries will however prove a tough nut to crack for the stakeholders in the town given the caliber of contestants believed to be contesting for the ticket.

Nnewi 2023: As Nnewi Prepares For Anambra State House Of Assembly

Anaedoonline.ng gathered that while Ambassador Charles Nwonye, Hon. Peter Nwosu, Comrade Ibeneme Onyeka, Architect Izuchukwu Okwumuo have so far paid and obtained the expression of interest and nomination forms, it is not yet clear on whether, Barr. Obinna Ubah, Hon. Ezenwa Oguadimma, and Barr. Somto Okonkwo who is believed to have the support of some Nnewi stakeholders, has picked their forms.

While the likes of Somto Okonkwo, Peter Nwosu, Ibeneme Onyeka, and Charles Nwonye have intensified consultation across different political wards in Nnewi and party headquarters in Awka, it is not clear on what are the plans of Izuchukwu Okwumuo and Obinna Ubah who have not been seen anywhere.

According to speculations in some quarters, while Peter Nwosu is the most popular aspirant, Barr. Somto and Ibeneme Onyeka are the favorites to clinch the ticket based on the strategic support they have in the bag.

Barr. Okonkwo Obinna Somto is the youngest among all the aspirants. He is a graduate of Law of the then Anambra State University Uli now Chukwuemeka Odumegwu Ojukwu University, Uli. Barr. Okonkwo Somto Obinna also obtained his Master’s degree in International Law (LLM), in Coventry University UK.

It is being speculated that Barr. Somto is the anointed son of Chief Dr. Cletus Mmadubugwu Ibeto; CON.

For Ibeneme Onyeka, he has a Bachelor Degree in Political Science from the then Anambra State University (Chukwumeka Odumegwu Ojukwu University) Igbariam Campus. He has a Master’s Degree in International Relations from the same University. Comrade Ibeneme is currently pursuing his P.HD in Comparative Politics and Conflict Management. He has a Proficiency Certificate in Management from Nigeria Institute of Management (NIM).

It is believed he has the support of the Chairman of Innoson Group of Companies, and the man behind Africa’s first automobile brand, Innoson Vehicle Manufacturing, Chief Dr. Innocent Chukwuma (Innoson).

Having served as the President-General of Uruagu Nnewi, Charles Nwonye is one of the most popular APGA aspirants, however, he has a lot of competence and credibility questions which have continued to reduce his acceptance.

Although he has been trying to garner support, especially from stakeholders and potential delegates, close observers believe that his chances are low.

Peter Nwosu remains the most popular aspirant among all the aspirants, he has been consistent with his relationship with the Church, Community, and Party in the last ten (10) years. He has the backing of most locals and party faithfuls, however, there is a lot of questions as regards his competence.

For Barr. Obinna Ubah, it appears he is still in the hiding.