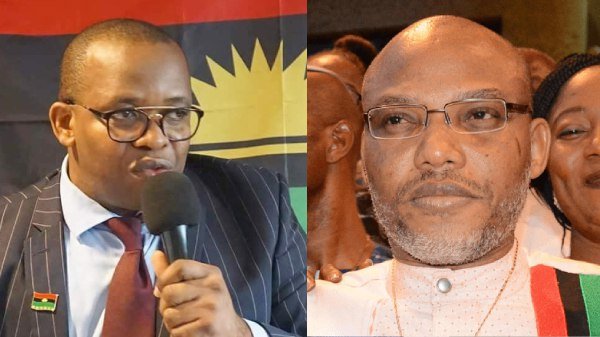 Uche Mefor, the former deputy leader of the Indigenous People of Biafra (IPOB), has accused the group’s incarcerated leader, Nnamdi Kanu, for the continuing violence and deaths in Southeastern Nigeria once again.

Mefor accused IPOB members of killing their own people in the region on Tuesday, blaming the problem on Kanu’s harsh remarks and threats of violence.

Kanu is being held by the Department of State Services while awaiting trial on seven counts touching on terrorism and treasonable crime (DSS).

Mefor, who blamed Kanu for the violence in the South-East, adding that the separatist organization IPOB’s activities had made attaining a separation for the area impossible.

In a Facebook post on Tuesday, Mefor said, “IPONK (Indigenous People of Nnamdi Kanu while referring to IPOB) have made the reality of Biafra Restoration even ever more remote by their criminality and by helped and enabled by helping the Nigerian state to criminalise the project.

“Consequently, rather than being near or immediate, the Biafra Restoration will continue to be a mirage until the dent and damage are repaired and undone.

“The insecurity in Igboland was orchestrated by Kanu’s violent utterances, threats of such violence, and its official adoption as a policy. Simon Ekpa is a member of IPOB and was among the Facebook bloggers drafted by Kanu in the last quarter of 2020 to help do the hatchet job of blackmailing innocent people and promoting violence against those they called saboteurs and traitors for him. They are one and the same group of people.

“They are essentially part of the wider alliance of evil non-state actor violators of human rights in Igboland—targeted assassinations, torture, enforced disappearances, and other forms of inhumane and degrading treatments against unarmed Igbo Biafran civilians. These are killers of their own people, all in the hope of getting Biafra. They kill their brothers in the name of Biafra—the same people that they claim to protect and liberate.

“Finally, take this or leave it, we maintain that IPONK will destroy themselves by themselves. Their latest self-destructive, self-annihilating move is hypocritically deny their atrocities in broad light and shift their culpability to one of their own called Simon Ekpe. The more Simon Ekpa is demonised by IPONK, the more IPONK expose and implicate themselves; and ultimately compound the case of their leader because they are the same evil syndicate and conglomerate.

Similarly in September 2021, Mefor in a post on his Facebook page, blamed the IPOB leader for the brutal killing of civilians during IPOB-ordered sit-at-home, even though the separatist group later cancelled the sit-at-home protest.

Mefor, in the post titled: “IPOB Nnamdi Kanu remain cursed-Nemesis/Karma remain in full gear until the confessions and the self-destructive expositions are complete”, described IPOB as cursed.

“In the fullness of time, humanity shall recognise and appreciate this fact that treachery does not pay nor does it do anybody or any group any good, IPOB NNAMDI KANU is cursed beyond redemption.

“The spirit of the land of our ancestors, the land of Biafra abhors injustice, it frowns on the abomination of crimes against humanity which go to the very heart of spilling of the blood and beheading of Biafrans by Biafrans on Biafran soil and the desecration of our heritage.

“The legacy of lies, of deception and of blackmail which we proudly fought against and which they have continued remains her waterloo. These IPOB NNAMDI KANU shall continue with the CONFESSION; they shall continue to speak in confusing, hostile languages among themselves until they completely expose their evils and atrocities by themselves and you know what? They have no control over it because cursed people do not influence what befalls or happens to them.”

JUST IN: APC NWC Takes Over NEC Powers For 90 Days

Bestiality: See What Police Said About Girl Who Allegedly Died Of Infection...