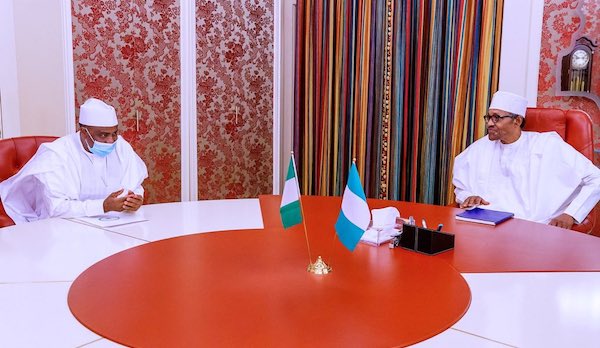 President Muhammadu Buhari met with Aminu Tambuwal, the governor of Sokoto State and a presidential candidate, behind closed doors at the Presidential Villa in Abuja on Tuesday.

According to Anaedoonline.ng, the governor came to the White House at 11:15 a.m. to notify President Barack Obama of his presidential ambitions on the PDP platform.

Governor Tambuwal and Mohammed Hayatu-Deen, the former Managing Director of FSB International Bank, were among the presidential hopefuls in the PDP’s consensus agreement.

Tambuwal accused Saraki of being behind the alleged endorsement, speaking through the Tambuwal Campaign Organization’s Director of Mobilization, Nicholas Msheliza.

The Governor stated that while the endorsement did not accurately reflect their previous discussion, they had agreed that the problem of a consensus arrangement was not working.