REVEALED: Why Amaechi, Ngige May Be Disqualified By APC 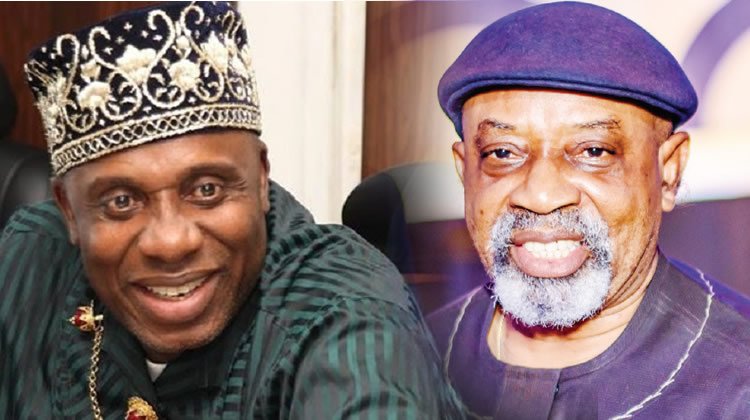 Following their failure to resign from their respective posts, Nigeria’s Minister of Transport, Rotimi Amaechi, and his colleague in the Ministry of Labour, Chris Ngige, risk being disqualified from the All Progressives Congress’s (APC) Presidential primary.

According to Anaedoonline.ng, Section 84 (12) of the new Electoral Act requires any political appointees seeking electoral office to resign before participating in any party primary.

While signing the election law on February 25, President Muhammadu Buhari voiced reservations about Section 84(12) and requested the National Assembly to remove it. He then wrote to the National Assembly, demanding that the modification be made. However, the President’s request was turned down.

A Federal high court in Umuahia, however, found that the clause was unconstitutional and ordered Attorney General Malami to remove it.
The ruling has subsequently been challenged by the National Assembly and the Peoples Democratic Party, or PDP.

“If the court upholds Section 84, the impacted minister would be disqualified,” a member of the APC NWC who requested anonymity stated. They can contest without quitting if the court removes the provision. If they don’t want to be disqualified, my advise to them is to quit.”

In a statement, APC National Publicity Secretary Felix Morka said the party will guarantee that all political appointees in the party who want to run in the 2023 elections follow Section 84 (12) of the electoral Act.

“The party will simply follow the Electoral Act. Any member of the party who is in an appointive position, we will expect such individual to resign before our primaries. We are hopeful that they will comply at the right time and we are going to ensure that anyone seeking our ticket will not breach the Electoral Act.”

Arewa Group Reveals Why They Picked Jonathan For 2023 Presidency

LATEST: Igbo Monarch Reveals What Will End Agitation For Biafra