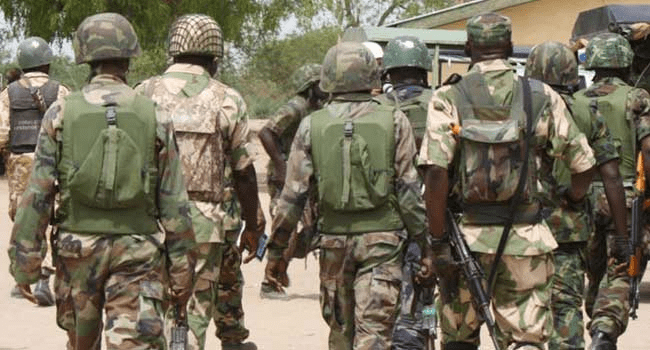 Troops from the Nigerian Army’s 34 Artillery Brigade have neutralized two gunmen, seized their weapons, and arrested four others in Imo state.

This is stated in a press statement signed by Brig. Gen. Onyema Nwachukwu, Director, Army Public Relations, and made accessible to media in Owerri, Imo state capital, on Tuesday, April 26.

The gunmen, believed to be members of the outlawed Indigenious People of Biafra (IPOB), were neutralized by military in a ferocious fire battle on Monday, April 25, on Orlu–Orsu Road, according to Mr Nwachukwu.

He added that while on normal patrol, the forces came into contact with suspected IPOB members near the Aluminium Company and All Saints Church on the Orlu-Orsu route, Daily Post reports.

He claimed that when the criminal elements saw the patrol squad, they opened fire and launched a grenade attack on the military.

The watchful military, according to Nwachukwu, responded with superior weaponry, neutralizing two of the criminal elements and forcing the others to leave in disorder.

He said: ”Four of the fleeing gunmen were apprehended, and one AK 47 rifle, two magazines, one Police grenade launcher, two Baofeng communication radios, and five cell phones were recovered.

”Preliminary investigation on the suspects’ mobile phones reveals gory pictures and videos depicting scenes of cold-blooded murders, corpses displayed in shrines and other heinous atrocities committed by the criminals,” he concluded.

Lady Reveals Why Hookup Girls End Up With Wealthy Men