See Nollywood Actors Who Married More Than One Wife 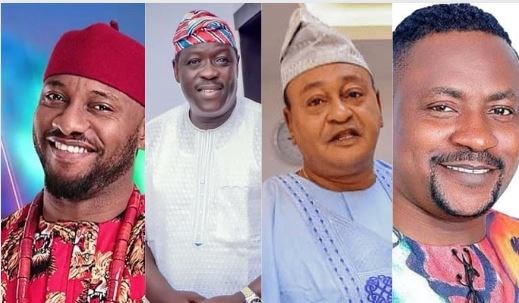 The Nollywood equivalents, like the normal Nigerian guy who wants a large family and would want to settle with more than one lady, are not left behind in developing similar ambitions.

We understand that marriage is the joining of two persons in monogamy, whereas polygamy is the union of a man with several women.

In the movie business, certain superstars from either the Yoruba or Igbo speaking parts of the industry have decided to marry more than one lady over their lives. This might be due to divorce, death, or simply the joy of having more ladies at their beck and call.

We’d be seeking for Nollywood stars who have married more than one woman. Yul Edochie, a popular Nollywood actor who has been married to May Aligwe for over 17 years and has four wonderful children, aroused controversy when he announced the arrival of his son with his mistress turned second wife, Judy Moghalu, on Wednesday, April 27, 2022.

Although the 40-year-old Nigerian actor’s announcement met a massive online resistance, the actor assuredly hailed his first wife, as his first and original love. Tchidi Chikere, a Nollywood actor and filmmaker, had his first marriage when he was young, which lasted 11 years, and his second marriage to his colleague, Nuella Njibigbo, just ended after seven years. According to the actor, he is married to two women: his first wife, Alhaja Risikat Ejide, whom he met in secondary school, and his second wife, Nosimot, whom he met through his younger sister.