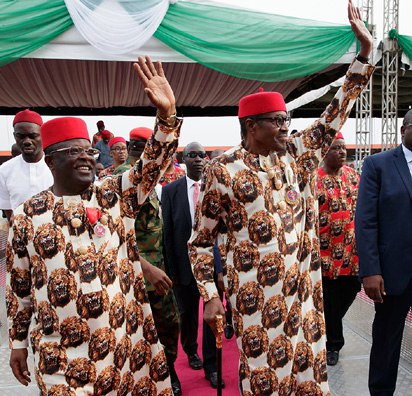 Chief Mbazulike Amaechi, an elder statesman, has reacted to the sit-at-home order issued by unidentified gunmen ahead of President Muhammadu Buhari’s visit to Ebonyi State.

According to Anaedoonline.ng, the state governor, David Umahi, has stated that the president will visit the state for two days, starting today (Thursday) and ending Friday.

Following the announcement, the gunmen issued a two-day sit-at-home order in the region, instructing Ebonyi residents not to greet the president.

In an interview with reporters on Thursday, Amaechi, a former Minister of Aviation and a leading Igbo politician, ordered the gunmen in the region to drop their sit-at-home order.

He also appealed to them not to embarrass the Igbo people or President Buhari and make things difficult in the effort to secure the release of the leader of the outlawed Indigenous People of Biafra (IPOB), Nnamdi Kanu.

Amaechi said: “I read on social media that a militant group has stated the coming of the President to the Southeast. Please I want to appeal to whosoever, or group, behind the statement to please withdraw that threat.

“Anything that would embarrass us or the President would make things difficult for us (in their efforts to ensure that Nnamdi Kanu, leader of the outlawed Indigenous People of Biafra, IPOB, is released).”