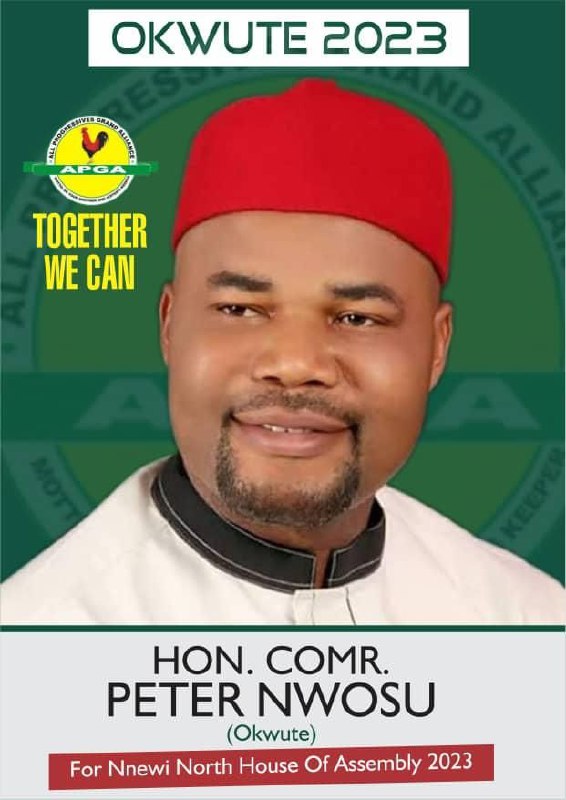 Comrade Peter Nwosu popularly known as Peter Nupen is a native of Nnewi. He was born into the family of Late Mr. Vincent and Mrs. Vero Nwosu of Ndiezenwankwo-Umumeagbu Uruagu in Nnewi North Local Government Area of Anambra State.

He started his education at Akwuegbo Central School, Uruagu Nnewi, before he proceeded to Balewa College Zaria and later Nigeria Defense Academy Kaduna.

Okwute came back to Anambra and furthered his Education at Federal Polytechnic Oko in 2003 where he obtained his OND in Business Administration.

Okwute ventured into oil business in Anambra State in 2002, and within the period of six (6) months won an outstanding award of Best Products Inspection Officer.

He rose to become a product inspection officer for numerous oil and lubricant firms in the South East region.

He also served as the Personal Assistant (PA) to Giologist Roymond Ifeadigbo, the then National Chairman NUPENG.

From there he won so many awards of excellence including being the grand patron of NUPENG, Patron Petroleum Dealers Association of Nigeria.

Comrade Peter Nwosu has been active in rendering selfless service to humanity and to the community at large;

⁃ He served as the Uruagu Security Chairman.

– Sponsors many in his scholarship scheme.

⁃ Pays the elderly and the widows in his community.

During his tenure as the Senior Special Assistant (SSA) to the former Governor of Anambra State, His Excellency, Chief Dr. Willie Obiano on Petroleum, Okwute made sure that que never returned to our patrol station.

Okwute made provisions and ensured that security was never a challenge to filling stations around Anambra with Special arrangements with NSCDC.

Peter Nwosu has empowered the youths to become successful in their different fields of endeavor.

Peter while helping in the Human capital development of the youths, has supported youths in sports.

He made NUPENG Nnewi zone to be strong and effective to the extent of uniformity of price and accuracy of pumps.

As a member of All Progressive Grand Alliance (APGA), Comrade Peter Nwosu is a core party man who sees party as supreme, especially in the cases where he has the interest to run at different occasions from State House in 2007, to vying for Reps etc but was appealed to step down. He always obeys and supports the party with his resources.

Due to the threat of insecurity, Comrade Peter Nwosu was part of the few stakeholders that opened his compound when many were afraid to hold meetings during the buildup to November 6th Governorship election and made sure party men and women are hosted.

Comrade Peter was the only Party man who bought three extra shuttle buses when there was a shortage of buses for campaign and have bought many vehicles for candidates, different groups and individuals.

Peter always identifies and supports financially any member vying for State House, Reps, Senates, and Governor with his resources.

He has always identified with ward and chapter leaders across the ten (10) political wards in Nnewi North and beyond and made sure APGA wins in each election.

Okwute is a strong advocate of the youths, hence so many awards from religious, political, and social youth bodies.
Card Peter Nwosu is vying for Anambra State House of Assembly to represent the good people of Nnewi North in the 8th Assembly which is believed that the time is riped.

Together with your support Umunnem Ndi Nnewi North, he would have more opportunities to serve and give back to the community.

To God be the Glory.

2023: What Will Happen To APC After Primaries – Bola Tinubu