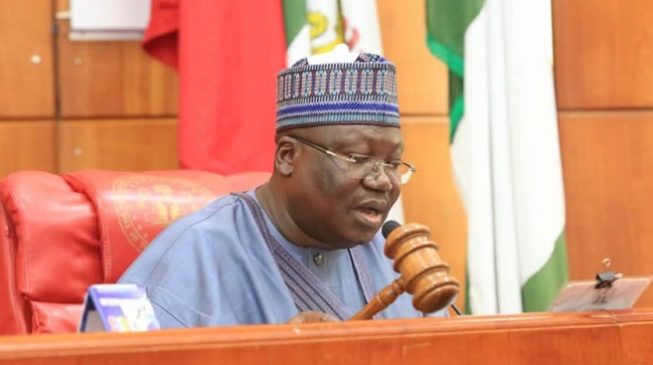 He said this while unveiling a list of senators who want to run for president in 2023 on the governing All Progressives Congress platform (APC).

Senator Kalu was praised by Lawan as a statesman for quitting from the presidential contest to support him.

He said: “The first person to buy presidential nomination form is Senator Ibikunle.Amosu; the next is the distinguished deputy Senate leader, Senator Robert Ajayi Boroffice.

“Also I got the nod and I have shown my interest to contest for the Office of the President of our great country on the platform of our great party, the APC.

“So the Senate contingent is a formidable one and by the grace of the Almighty God the aspirants for the All Progressives Congress and maybe the Peoples Democratic Party (PDP) as well will make headway.

“The Chief Whip, who is also an aspirant, has stepped down to support my aspiration. So the Chief Whip of the Federation, I will thank you for what you have done for being a statesman.

The Senate President said on Monday that a group working under the cover of “National Stability Project,” directed by Mr Sam Nkire, supplied him with the presidential nomination form.

After an elaborate ceremony at the Senate President’s guest residence in Maitama, Abuja, where certain Senators loyal to him were present, the nomination form was delivered to him.