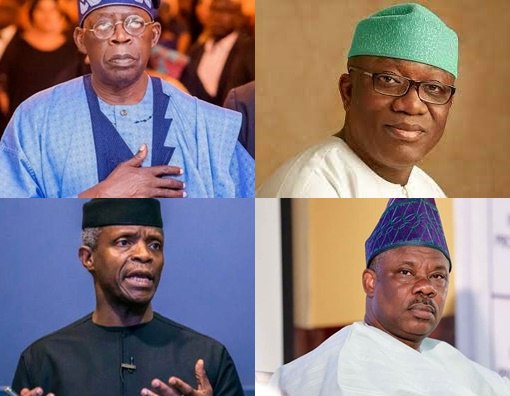 The All Progressives Congress (APC) in the South West is allegedly putting pressure on presidential candidates in the region to settle on a consensus candidate.

The APC leaders in the region are reportedly making the move to avoid jeopardizing the region’s prospects of producing the next president.

Recall that a meeting of aspirants in the zone was organized by former APC National Chairman Chief Bisi Akande and former Ogun State Governor Olusegun Osoba.

During the discussion, they decided that their electioneering efforts should be conducted without antagonism, rancor, and in a friendly way.

However, a source informed Newsmen that the zone’s officials were uneasy about all of the candidates participating in the primary on May 30.

According to the source, some of the leaders believe that sending a large number of candidates to the presidential primary would not help the South West produce the next president.

As a result, they stated that the zone will settle on a candidate before the primary begins.

“All the other aspirants are expected to work for the emergence of a consensus aspirant at the presidential primary. This is the way the zone can have the upper hand, otherwise, another aspirant might emerge if the house is divided,” he said.

Another source revealed that the move might fail as some aspirants believed that those leading the consensus arrangement were loyal to one of the aspirants.

He said the aspirants were pushing to be allowed to choose one of them during which they would agree on a consensus instead of allowing the elders to decide for them.