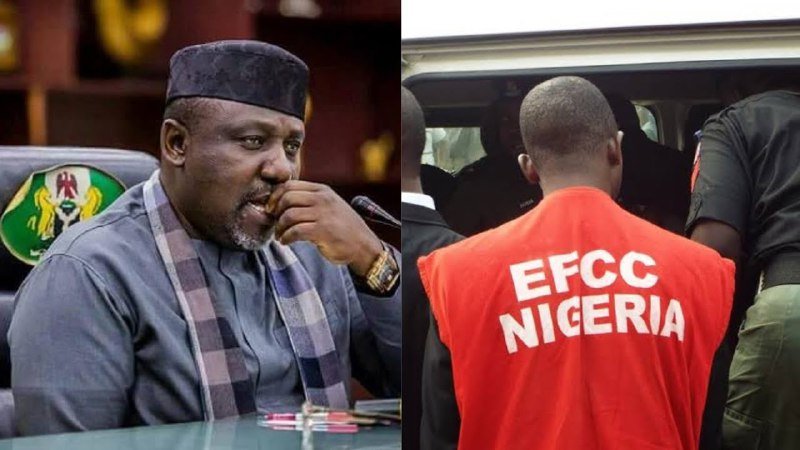 The siege erected by agents of the Economic and Financial Crimes Commission (EFCC) on the residence of former Governor of Imo State, Senator Rochas Okorocha, has sparked outrage.

The EFCC operatives surrounded the house of the member representing Imo West Senatorial district, according to Anaedoonline.ng.

The presidential candidate of the All Progressives Congress has a private apartment at No 3, Nyasa Close, off Ontario Street.

During the raid, Nigerian Police Force personnel were also present at the property.

According to reports, the former Governor has turned down repeated requests from the panel to testify about suspected corruption accusations.

Following the development, some netizens took to Twitter to express their views regarding the raid on Okorocha’s residence.

Below are some of the reactions.

This one EFFC is after Rochas Okorocha, did he buy form and refuse consensus?

Are they trying to use him as an experiment for others?

Someone wants to keep Okorocha out of circulation ahead of APC Primaries.

Seems our man will run from Prison

Abuja home of Senator Rochas Okorocha has been surrounded by the EFCC with intention to arrest him.
Senator and his family members,are demanding for warrant of arrest by efcc.. pic.twitter.com/IZznCw4EQq

The foremost South East presidential Aspirant on the @OfficialAPCNg, @realRochas is being held hostage at the moment in his house by agents from @officialEFCC . This is a calculated attempt to prevent his Excellency Distinguish Senator Owelle Rochas Okorocha from being screen

See What Simon Ekpa Said About Arrest Of Ekweremadu, Wife Over Alleged...