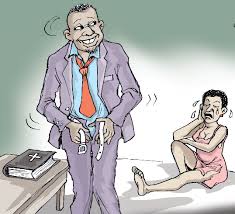 The Force Criminal Investigation Department (FCID) Alagbon in Ikoyi, Lagos State, is investigating a sexual assault charge against one Bishop Daniels that was reported to its station.

According to Anaedoonline.ng, a woman went to the police station to accuse Bishop Daniels, the founder of a church in Lagos State, of raping her twice.

The accuser, who is supposed to be an assistant female pastor, said in her statement that the clergyman had carnal knowledge of her twice at his home in the state’s Lekki region.

How My Ex-boyfriend Locked Me Up, Raped Me Daily – Juliet Ibrahim

Bishop Daniels, her claimed abuser, is allegedly married with children. She claimed the cleric had raped her twice and that she had bled during the incidents.

Anaedoonline.ng understands that the victim who claimed she was based outside Lagos, was summoned to the Lagos headquarters of the church where the incident happened.

Narrating her encounter with Bishop Daniels, the victim said, “He wanted me to attend a meeting and the date clashed with my brother’s wedding. So, I didn’t attend the meeting and as punishment, he ordered church members at my branch not to celebrate my birthday and instructed me to report to the church’s headquarters in Lagos for punishment.

“So, I went to his house in Lekki for the punishment and when I got there, he said I should strip naked because he wanted to beat me. He was alone at home. He saw that I was shocked at his statement and started making me feel guilty.

“He said his spiritual father tested him in many areas and after hours of contemplating, he became angry that I disobeyed him. So, I went into the guest room, took off my clothes and closed my eyes as I came out to meet him. He told me not to close my eyes, and ordered me to kneel as he sat on a chair.”

She narrated further: “He saw my nakedness and said he wanted to test my loyalty and was not having sex with me. He told me to put my clothes back and after wearing them, he told me to take them off again and I did. He later told me to go and not tell anyone, but after leaving his place, I told some of our senior church members.”

The victim as reported by Newsmen, narrated further that she returned home after the experience. However, she said after some time, Daniels called her to report at his residence over another incident.

She said, “So, while at his house, he told me he would punish me for an offence and said I should transcribe the messages in one of his teachings. The next day, the pastor of the branch in Ibadan and his wife whom I met at his residence the previous day left, so I was alone in the house with Bishop Daniels.

“So, while in the sitting room with him, he attempted to kiss me and I stopped him; then he slapped me. He was angry and said the last time he told me to go naked, he didn’t do anything with me. So, he left and I went into the room to sleep.

“The following day, we were in the sitting room listening to a pastor’s message when he said I should go naked again. I did, and surprisingly, he also went naked and raped me for about 30 minutes till I started bleeding because of the tears I sustained despite not being a virgin.

“The incident happened around 10pm; I was dumbfounded. He told me to go inside the room to clean up myself and before I returned, he had cleaned up the blood on the floor. He told me not to tell anyone, but I told a pastor in my church.”

According to her, the cleric refused to let her leave his house, adding that when he attempted raping her the following night, she pleaded with him that she was tired.

“In the morning, I greeted him, but he didn’t answer. Later, he started saying I should be privileged that he had that kind of thing with me. All of a sudden, he took off my clothes and raped me again and I still bled the second time. It was traumatic for me.

“He told me to go to the bathroom to wash and he cleaned the blood before I came out. I picked up my phone, and informed the pastor of my branch and another church member of our branch, who decided to come to the pastor’s house,” the 22-year-old said.

She claimed the Bishop begged her that he never knew what came over him.

She said: “When the church member came, I wanted to follow her out to tell her the story, but he prevented me from leaving the house. I later left his house but while thinking about the incident, I felt suicidal.

“I stopped going to the church and my branch has been closed down. I reported the incident to the Force Criminal Investigation Department, Alagbon, in 2020. But the investigating police officer, one inspector Samuel, told me to bring N70,000 if I wanted him arrested.

“I did not have that money and had to stop going to the station. Bishop Daniels started sending people to beg me, but I just moved on. Recently, two other victims reached out to me that Bishop Daniels attempted to have sex with them and I got someone ready to sponsor my case.

“So, I instituted the case again last month at the FCID Alagbon and he was arrested last week. I want justice, but the police have yet to charge him to court even after I gave them all my evidence, including how he was threatening me over the case and how his wife was begging me.”

Responding to the victim’s claims, Bishop Daniels was contacted over the matter but he denied having any pastor with the name mentioned before him.

However, according to the report, Bishop Daniels was heard in one of the audio recordings the victim sent to newsmen, telling her that they should commit sin together.

Also in another audio, the victim was heard crying as she challenged the bishop for telling someone that she wanted sex with him and he did it. Responding, Daniels, in the audio said, “Don’t say that to anybody, I have not even been talking to anybody.”