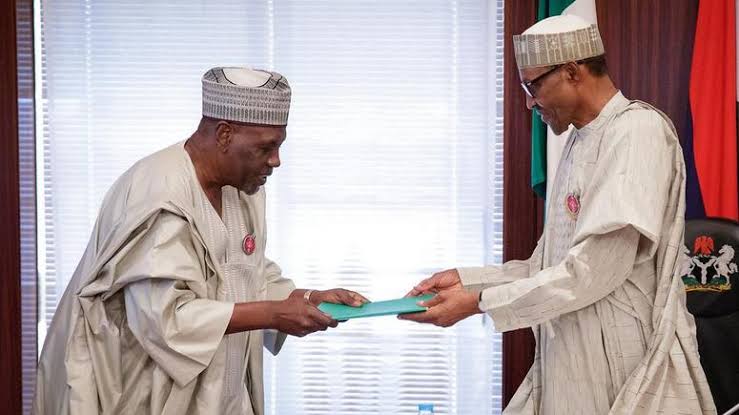 The government of President Muhammadu Buhari recognized Babagana Kingibe, the running partner of MKO Abiola, the proclaimed victor of the 1993 presidential election, as a former Vice President on Monday.

During the Democracy Day ceremony at the Eagles Square, Kingibe was referred to as former Vice President, according to Anaedoonline.ng.

On Monday, during the celebration, Kingibe was invited to join President Buhari, former President Goodluck Jonathan, and Senate President Ahmad Lawan for a group shot.

President Buhari Reveals Why He Made June 12 Democracy Day

The Speaker of the House of Representatives, Femi Gbajabiamila, the Chief Justice of the Federation, Ibrahim Tanko, and the National Chairman of the All Progressives Congress (APC), Abdullahi Adamu, were among the luminaries invited for the picture.

Remember that in 2018, President Muhammadu Buhari’s administration moved the commemoration of Democracy Day from May 29 to June 12 to honor MKO Abiola, whose presidential election was invalidated by then-military Head of State Ibrahim Badamosi Babangida.

Kingibe was not formally recognized as a former Vice President of Nigeria till now.

This year’s Democracy Day will be President Buhari’s final one as the country’s leader.

A new government would have taken over in 2023 during the next celebration of Democracy Day at Eagle Square.