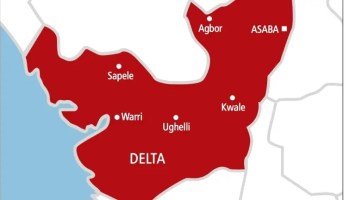 According to ANAEDOONLINE, the two accidents occurred on Wednesday.

While the first crash involved an articulated trailer and a motorcycle, the second accident involved a truck and an 18-seater bus.

We learnt that the trailer crushed four occupants of the motorcycle by Orogodo River, Agbor, in the morning, while the other accident happened around 3.30pm.

An eyewitness, who did not identify himself, said, “It was an eyesore; sympathisers wept at the manner the trailer crushed four men to death.

“I saw the trailer coming down the road towards the motorcycle. I started shouting at the Okada man, who was trying to avoid a pothole, but he didn’t hear.
“Then the trailer ran over the Okada man and killed all four persons instantly.
“The victims of the second accident were roasted to death; the driver of the bus and three others died on the spot.”

Other passengers on the bus, who sustained injuries, were reportedly rushed to a nearby clinic for medical attention.

He said, “Yes, it is true and eight persons died. The accident that involved the motorcycle was terrible. The recklessness of the Okada man made the trailer crush them, while the other was caused by speed.”

Eshiet called on motorists to limit their speed to enable them to control their vehicles in case of any eventuality.