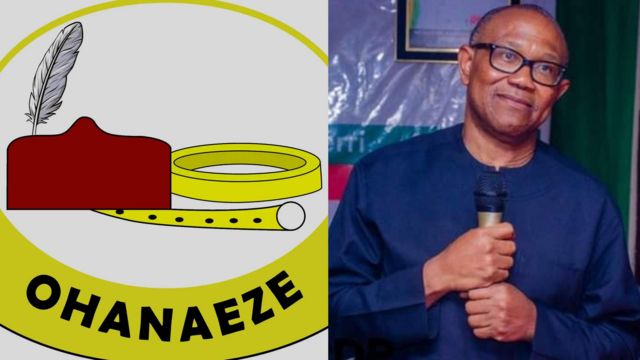 The organisation stated in a statement on Tuesday that the news was spread by Solomon Aguene, the immediate past president of Ohanaeze Ndigbo Worldwide, Lagos State Chapter.

It further notified the public that Sunday Ossai, the present president of Ohanaeze Ndigbo, Lagos State Chapter, is the only person authorized to speak on the group’s behalf.

‘Ndigbo Have One Voice For Next Elections’ – Aguene Explains

The gang went on to say that the false impression of discarding Peter Obi came from hell and was intended to suit corporate interests.

The statement read: “The attention of Ohanaeze Ndigbo Worldwide has been drawn to the news making the rounds with a caption “Ohanaeze Ndigbo dumps Peter Obi, declares support for Tinubu”.

“The story added that since the group was in support of a second term for Governor Babajide Sanwo-Olu of Lagos State, there was nothing wrong in supporting his (Sanwo-Olu) presidential candidate. The purveyor of the above remarks is Chief Solomon Aguene, the immediate past president of Ohanaeze Ndigbo Worldwide, Lagos State Chapter.

“In line with the constitution of the apex Igbo socio-cultural body, an electoral panel headed by a seasoned technocrat in the person of Nze Ozichukwu Chukwu was constituted by the President General of Ohanaeze Ndigbo, Ambassador Professor George Obiozor, with a mandate to conduct a fresh election for the Lagos state chapter.”

“Information reaching Ohanaeze Ndigbo indicates that Aguene has secured a tenure elongation from a Lagos court. This is to say the least very deplorable.”

“Ohanaeze believes that any person with a democracy credential will dissociate self with a person whose public conduct is at variance with democratic norms; and that the Aguene endorsement to a presidential candidate is hollow. It is therefore emphasized that the person who has the right and mandate to make statements on behalf of Ohanaeze Ndigbo in Lagos is the President, Chief Sunday Ossai.”

“For the avoidance of doubt, the misleading impression that “Ohanaeze dumps Obi” is from the pit of hell and meant to serve private interest. Such a statement is hereby vehemently debunked.”