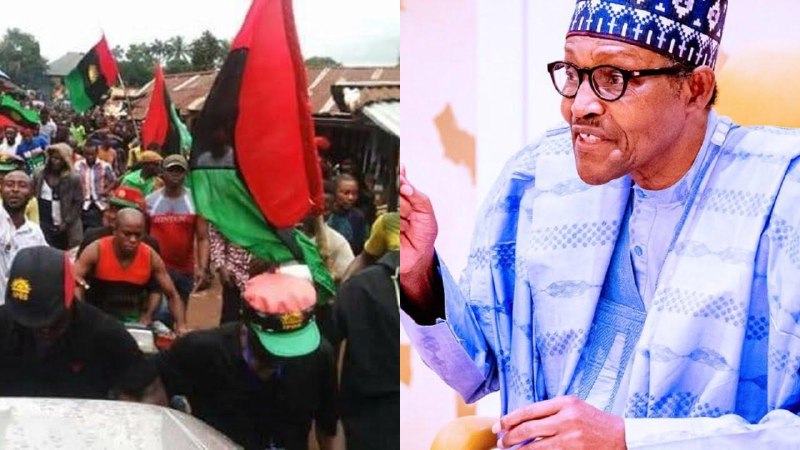 President Muhammadu Buhari of Nigeria has encouraged Nigeria’s foreign partners to identify the Indigenous People of Biafra, led by Nnamdi Kanu, as a terrorist organization.

In an interview with Bloomberg on Tuesday, Buhari made this statement.

In response to queries about the country’s security issues, Buhari noted that his government purchased fighter planes from the US and collaborated with the UK on intelligence sharing to battle the insurgency in Nigeria.

He pointed out that past administrations had not received such favorable treatment from the West.

Terrorists no longer control any land in Nigeria, according to Buhari, unlike in 2015, when “Boko Haram held territory the size of Belgium within Nigeria’s borders.”

“The chief of ISWAP (Islamic State’s West Africa Province) was destroyed by a Nigerian Airforce airstrike in March,” according to the President, who also claimed that other terrorist commanders in the nation had died.

He did, however, request that the IPOB be designated as a terrorist organization by Western partners.

“In 2015, Boko Haram held territory the size of Belgium within the borders of Nigeria. Today they are close to extinct as a military force. The leader of ISWAP was eliminated by a Nigerian Airforce airstrike in March. The jets acquired from the US and intelligence shared by British were not provided to previous administrations and stand as testament to renewed trust re-built between Nigeria and our traditional western allies under my government.

“We urge those same international partners to take additional steps costing them nothing, by proscribing another group – IPOB – as a terrorist organisation,” Buhari said.

The Nigerian President added that the leadership of the IPOB “enjoys safe haven in the West, broadcasting hate speech into Nigeria from London, spending millions lobbying members of the US Congress, and freely using international financial networks to arm agitators on the ground.”