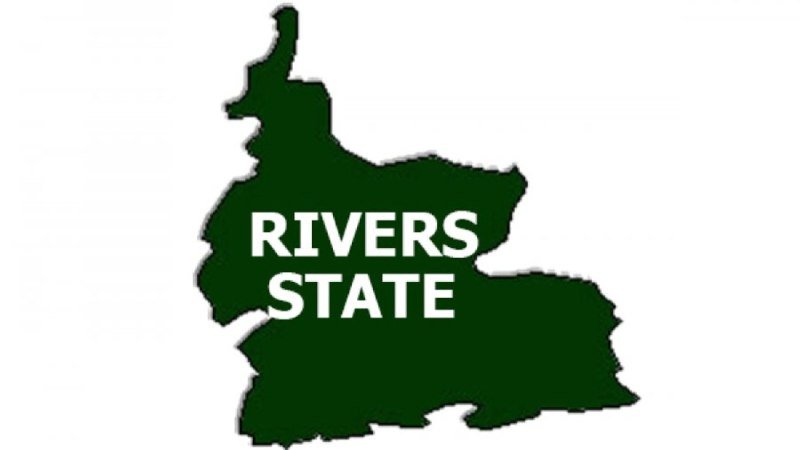 On Wednesday, members of the Rivers State Neighbourhood Watch Safety Corps Agency protested in Port Harcourt about the state’s failure to pay their salaries for the previous year.

The protesting employees withstood the city’s deluge while wearing their official uniforms and assembled at the Government House.

According to reports, the protestors, who came from the 23 local government districts of the state where they had been assigned, originally congregated at the entrance of the government house before moving the demonstration to Nyesom Wike’s private home on Ada-George Road.

It was gathered that the state government had allegedly stopped the payment of the state security outfit for over one year and that all efforts to get the monies paid was unsuccessful.
Mr. Matthew, the Director of Operations of the corps, said for over one years that their salaries have not been paid.

“We are here because of our salary. We have been suffering since 2018 till now. Some of our personnel have died in this same struggle. Today, we have fought to ensure Rivers State is peaceful.
“It looks as if we don’t know what we are doing. No logistics, no salaries, no vehicles, no office.

“Even some local government chairmen treat us like animals. They will use us and dump us. After using us they will say they don’t know about neighbourhood watch,” Mathew said.

Continuing, he said, “We will want to ask our father (governor). He is the number one citizen of this state, you are the founder of the Watch. Will you stay and see the Neighborhood Watch erased?
“A lot of them are getting tired. In the last election, we lost some of our people and there was compensation.”

The Director General of the Corps, Dr Uche Chukwuma, said all intervention to stop the protest did not work, but urged the angry corps officials to maintain calm.

Chukwuma regretted that the protesters were accusing him of compromise, saying he was in a dilemma.

He said, “There is no point denying it again because it has taken place already. They came to my office this morning to ask some vital questions and I gave them answers.

“After that they went to the government house unknown to me. When I got the information, I went there to disperse them, only for them to move from there to converge at the governor’s private residence.

” I also went there to talk to them and dispersed them too. I am not the one paying their salary. The governor is the one and not me. I have done my part to ensure they are calm.

“It is for the governor to pay their salary, including mine. I am the one in dilemma here because they came accusing me that the money has been paid and I sent it to my personal account.

“But after addressing them I believe they were convinced that was why they went to hear from the governor directly. They have been accusing me that the money has been paid to me but unofficially.

“I have asked them to go and maintain calm while I make an effort to see that the governor reaches out to us and addresses the issue.

“I will reach out to the authorities to ensure that this kind of incident does not happen again. I was really embarrassed today.”