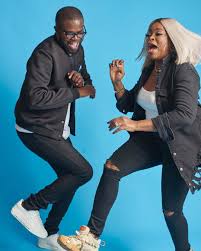 The divorce of Nollywood actress Funke Akindele, also known as Jenifa, from her spouse, JJC Skillz, has sparked reactions.

The comedy actress’s spouse previously acknowledged their divorce in a message on his Instagram account on Thursday morning, according to Anaedoonline.ng.

He said that he made efforts to prevent things from reaching this point, but it finally did.

He wrote: “Dear Friends and family I need to let you know that Funke and I have separated. While it lasted we shared a lot of things together and have created 2 beautiful children. The last two years have been extremely difficult for us. I know I have tried my best to fix things but I believe it is beyond repair now. 3 months ago and at Funkes insistence I moved out of the house and apart from AMVCA have not been able to get Funke to sit down in an amicable manner to discuss the future of our relationship.

“I’m making this announcement so that the public is clear that we both are pursuing separate lives. We still have issues that need to be addressed such as the custody and wellbeing of our children which is paramount as well as business interests which need to be disentangled but I have no doubt that these will be resolved one way or the other.”

Fans of the couple have taken to various social media handle to react to the sad news.

One olufunmiglitzndazzle wrote; ”It’s always easy to tell when they do too much for the gram just to keep up appearance.”

One tehillahr wrote; ”Marriage is tough to be honest but it takes two that decide to love another just as themselves by dying to self. It is well with both of them in Jesus Name. Amen”

One mubbyfabrics wrote; ”So far it is not a case of adultery or domestic violence…I believe you both can still work things out….MARRIAGE IS TOUGH but it takes patience and tolerance …..auntie Funke gives him a second chance.”

One pwinc3ss_zainab wrote; ”Omg 😢 this one is not a good thing to read”

One bayo_israel wrote; ‘‘It is painful the rate at which marriages are crashing these days. The outcome of which the issues of the marriage are gravely affected. May God heal all broken homes across the length and breadth of the world in Jesus’ Name. It is well!”

Why I Got Married To JJC Skillz – Funke Akindele

One duchess_dora wrote; ‘‘What is happening for Christ’s sake 😢😢 must all ships sink can’t they work things out just as our parents will do.”

One olayemi_akinlotan wrote; ‘‘God have mercy not again.”

One temitopeaderibigbe12 wrote; ‘‘It is well o. Dear Lord, take charge of my life, my marriage is committed to your hands. Help, lead and direct me.”