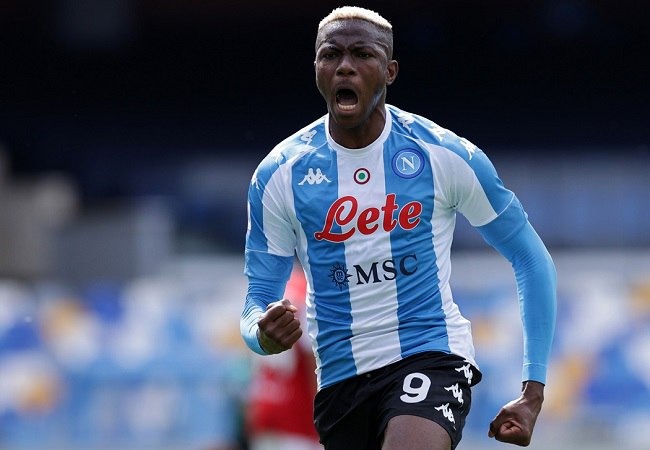 According to ANAEDOONLINE.NG Sports Extra, Napoli has confirmed Victor Osimhen as the club’s designated penalty taker for the upcoming season.

This comes after the Nigerian scored from the penalty spot in the Partenopei’s 1-1 pre-season draw with Real Mallorca on Sunday.

Reacting to his goal, Napoli wrote on their Twitter handle, “Osimhen!!! 1-0. But the most important thing: He’s gonna be our penalty kicker this season.”

Last season, it was Italy playmaker Lorenzo Insigne, who was in charge of the penalty role at the club. However, Insigne has left Napoli to sign for Major League Soccer side Toronto FC.

Osimhen, who joined Napoli from French Ligue 1 side Lille, has so far managed 62 appearances in total and scored 28 goals. Last season in Serie A, Osimhen managed 27 appearances overall and accumulated 1,992 minutes of playing time.

He was ranked joint eighth in the Serie A, scoring charts with a total of 14 goals and two assists.

Napoli will open their Serie A campaign with an away game against Verona at Marcantonio Bentegodi on August 15, before they return home to take on Monza at the Diego Armando Maradona Stadium on August 21.

The Poland international signed for Barcelona for a fee that could reach €50m earlier this month, bringing an end to his eight-year stay in Bavaria.

The German champions had been heavily linked with a move for Osimhen, but Kahn says another number nine will not walk through the Allianz Arena doors this window.

“We are not going to sign a new striker. There’s no discussion, no way,” Kahn told Bild.

“We still have options in the current team – (Joshua) Zirkzee, (Eric-Maxim) Choupo-Moting then the young Mathys Tel.”