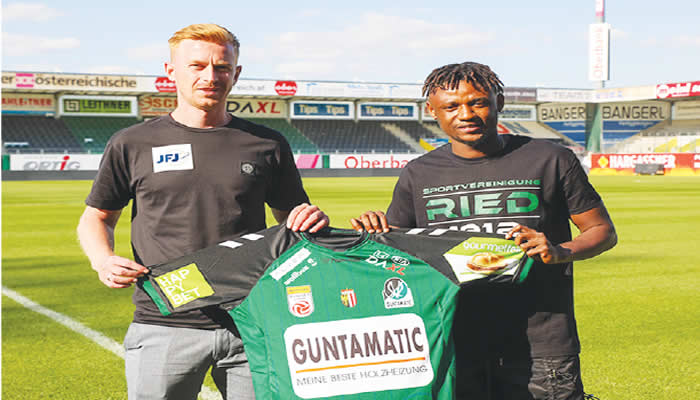 Kingsley Michael, who joined SV Guntamatic Ried from Italian club Bologna, has confirmed he will play for them this season.

The Austrian club confirmed on Wednesday that the 22-year-old Nigerian had joined on a season-long loan.

This young Nigerian is Paul Pogba’s biggest fan; on social media, he goes by the handle Pogba Junior.

“Kingsley Michael, who is under contract with Italian Serie A club FC Bologna, will play for SV Guntamatic Ried with immediate effect,” the club confirmed on their official website.

“The 22-year-old Nigeria international, who made his Serie A debut at Bologna in 2019, has signed a loan deal for the current season.”

“Due to the injuries in the past few weeks, we had to take action, especially in central midfield,” Reicheltshammer said.

Ibrahimovic Scores Twice for AC Milan In Their Win Over Bologna

“We deliberately took our time in our search to find a player who fits our requirements profile.

“We think we’ve found that type of player in Kingsley Michael. He is dynamic and aggressive in duels. It’s a win-win situation for both Bologna and us. Kingsley

Michael gets game practice with us, we get a very good player.”

Michael is confident he’ll help the team achieve their goals.

“I want to support SV Guntamatic Ried as much as possible, but also learn from the team,” said Michael.

“The coach explained the project to me here in Ried and that goes very well with my understanding of football. My strength is that I press high and I can definitely help the team with that. I am also very familiar with Austria because I had a personal coach in Linz.”