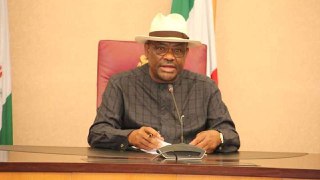 The claim that Governor Nyesom Wike ordered the PDP flags to be taken down from the government building in Port Harcourt doesn’t seem to be true.

On Thursday morning, there were rumors on social media that Governor Wike had instructed his Chief Security Officer to take down all PDP flags from the Government House.

However, Anaedoonline.ng’s research has revealed that no flag has been removed from the Brick House at Old GRA in Port Harcourt.

The report is false, a dependable source from Government House has also told Newsmen.

The source, who requested anonymity since he is not authorized to speak about the situation, claimed that all of the PDP flags inside the

There have been rumors that Governor Wike may be considering leaving the PDP due to his ongoing conflict with the party’s presidential candidate, Atiku Abubakar.

Wike was passed over in the selection of the candidate’s running mate after Atiku won the presidential nomination.