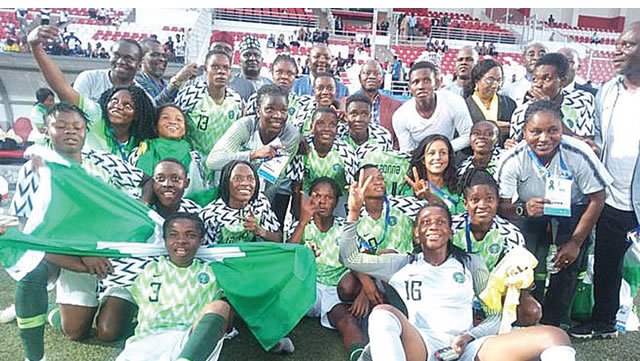 After defeating Canada 3-1 in Alajuela on Thursday morning, Nigeria’s U-20 girls’ Falconets team established a World Cup group stage perfect record for themselves, finishing with a perfect nine points out of nine in Group C.

Chris Musa, the head coach, stated before the game that his team would strive to win even if a spot in the quarterfinals was already secured in order to maintain their winning attitude after battling victories over France and Korea Republic.

That was exactly what the Falconets did.
Africa’s best team conceded their first goal of the competition in an accidental manner, following goalkeeper Omini Oyono’s poor management of a backpass from Jumoke Alani that granted Kala Novak a fortuitous goal in less than two minutes.

“It was great for us to come back from that setback, and also conceding first in the tournament. We showed character and spirit, and that would be huge for us going forward in the competition,” Musa said after the match.

Midfield impresario Esther Onyenezide, whose vicious curling shot earned all three points against Korea Republic to send the Falconets into the last eight on Monday morning, scored from the penalty spot in the 24th minute to pull the Falconets level. Defender Mia Pante had handled the ball from a Blessing Okpe shot in the box.
The Falconets looked composed and surefooted in the middle with the return of Deborah Abiodun, who sat out the encounter with the Koreans, and Chiamaka Okwuchukwu also played an inspired game after starting for the first time in the tournament. Her firm header from a Blessing Okpe cross in the 15th minute missed narrowly.

Onyenezide shot Nigeria ahead, also from the spot, in the 32nd minute minute, after Simi Awujo’s dangerous play against Mercy Idoko, as the latter went for a header from Rofiat Imuran’s inswinger, was penalised.

In the added time of first period, Idoko came close to scoring her first goal of the tournament, but her touch from another Imuran inswinger kissed the upright.

In the second half, the Falconets added pace and brilliant use of space to their game, and it was no surprise when Imuran, again with a visionary cross, set up substitute Chioma Olise for Nigeria’s third goal.

Their imperial campaign in the group stage earns the Falconets a quarter-final date with the Netherlands in Alajuela as from 1am on Monday (Nigeria time).