3 Vigilante Operators, A Security Guard And…

LATEST: Phyno Debunks Claim Of Been A…

2023 Elections: BBTitan Is A Distraction, Shun… 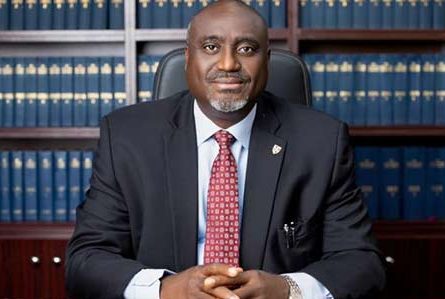 Yakubu Chonoko Maikyau, a Senior Advocate of Nigeria (SAN), has been sworn in as the next President of the Nigerian Bar Association (NBA).

According to Anaedoonline.ng, Maikyau took office after the Olumide Akpata-led government’s term had expired.

The lawyer received 38,000 electoral votes to become the NBA’s 31st President, winning the election for the position earlier in July.

Maikyau praised God for his support at the occasion. He also expressed gratitude to his YC Maikyau & Co. coworkers, his campaign staff, and friends and partners who helped him win the election.

Maikyau praised the outgoing Akpata administration for the enormous progress the NBA saw over the previous two years.

He asserts that he will make sure to build on the admirable accomplishments and initiatives of the Akpata administration in addition to maintaining them.

He extended a hand of friendship to everyone running against him for the position of NBA President, stating that he and his team would occasionally stop by to draw from their wealth of experience.

“I saw all your great manifestos and your laudable proposals for the NBA. What has happened is that we are now the ones who have been given the responsibility. I invite you all to join hands with us as we build the Nigerian Bar Association to that great heights we all desire,” the new president said.

2023: Comedian, AY Reveals Why Nigerian Celebrities Are Slaves To Fear During Elections

3 Vigilante Operators, A Security Guard And 5 LG Buildings Set On Fire In Anambra By Gunmen

JUST IN: Atiku Returns To Nigeria After UK Visit