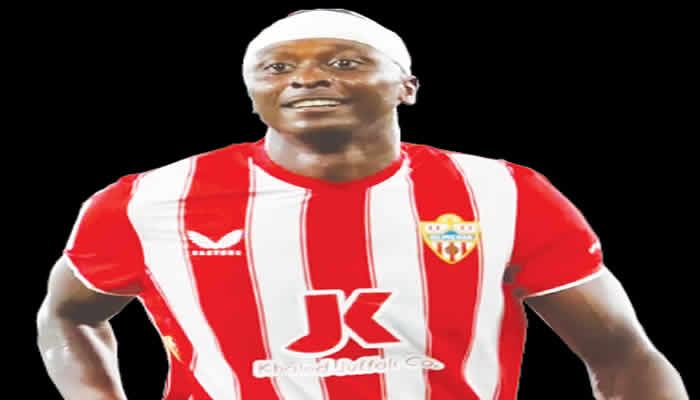 Sadiq Umar, a Nigerian international who has been the subject of transfer rumours for months, has reportedly completed his highly-anticipated transfer from Almeria to Real Sociedad, according to ANAEDOONLINE.NG Sports Extra.

Almeria and Sociedad have concluded discussions for the former Roma striker for a transfer fee in the neighbourhood of €20 million, claims transfer market specialist Fabrizio Romano.

Before putting pen to paper to sign a long-term contract and become officially introduced as a new Sociedad player, the 25-year-old is anticipated to fly to the Basque Country for his physical.

“Umar Sadiq to Real Sociedad, done deal as expected. Negotiations are completed around €20m — he will travel soon for medical tests,” Romano tweeted.

The departure of Swedish striker Alexander Isak to English Premier League side, Newcastle, played a huge role in Sadiq moving to the Basque club, as they identified the Nigeria international as a perfect replacement.

The former Almeria striker has been sought after by several clubs in Spain, with Villarreal, Sevilla, and Getafe among some of them.

Sadiq has grown to become fans favourites at Almeria, playing a major role as the Rojiblancos secured promotion back to the top division as champions of the Segunda Division, after eight years of asking.

During his spell with the club, the Nigerian scored 39 goals in 76 LaLiga 2 appearances, with 19 assists.

The Super Eagles striker could make his debut with Los Txuri-Urdin, as they are fondly called, when they host Atletico Madrid on match-day 4 of LaLiga on Saturday.

Sadiq has hit the ground running in the topflight league, having scored two goals from three games in the league and will hope to guide Sociedad to success in their quest to win the Europa League.