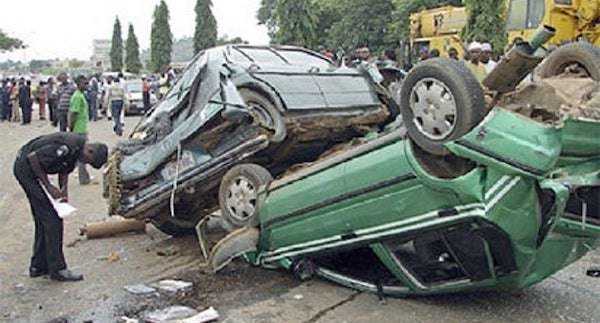 On the Enugu-Onitsha expressway in Anambra State, an accident in Enugu Agidi claimed the lives of a man, a wife, his daughter, and three other people.

According to sources, the collision on Sunday night at around 7.20 p.m. involved a red truck and a black Lexus RX330 Jeep that was transporting five people.

According to information obtained by Anaedoonline.ng, the truck driver was speeding when he abruptly lost control and collided with the Lexus Sports Utility Vehicle ( SUV).

The collision has been confirmed, and the Federal Road Safety Corps (FRSC) Sector Commander, Commander Adeoye Irelewuyi, has determined that excessive speeding was the reason.

“The probable cause of the fatal crash was excessive speed. According to an eyewitness report the truck driver was on speed, lost control and rammed into the Lexus SUV.

“FRSC rescue team from RS5.3 Anambra Sector Command took the victims to Amaku hospital where they were confirmed dead by the doctor on duty, and the corpses were deposited at the hospital morgue.

“The rescue team on ground managed traffic and ensured obstruction caused by the crash was removed,” Irelewuyi stated.

Irelewuyi expressed sympathy to the relatives of the deceased and issued a warning to drivers of trucks in particular to watch their pace and adhere to the posted speed limit.