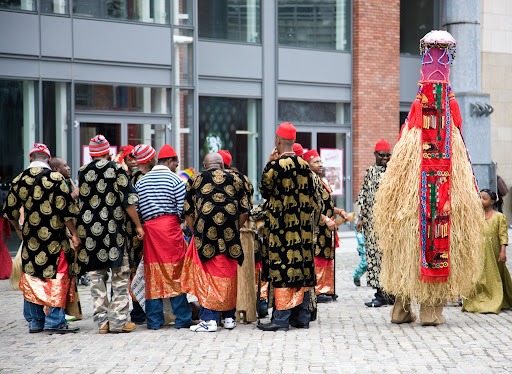 These are a list of Igbo people who are native to states outside of Nigeria’s so-called South East.

The majority of people don’t even realize that Arch Bishop Benson Idahosa and his wife are Igbo from Igbanke in the EDO state’s Uhuonde Local Government Area, which was originally in the Orhionwon LGA.

The majority of the locals, like the Ika people, have hybrid names that frequently may pass for EDO, such as Nduka Irabor, Jim Ovia, Omorogie Nwawanne, Collins Edumaruse, etc.

16) Osekwenike, Abuetor, and Eke Okpokri villages are all Igbo of Ukwuani origin and, as such, are members of the Anioma Igbo clan of the Igbo ethnic group in BAYELSA. They are all located in the Sagbama area.

19) Benue State’s Igbo population existed before the arrival of Christianity in Nigeria, especially in the state’s Ado, Oju, Obi, and Okpoku LGAs.

The Igbo found in Benue are: Umuezeokoha, Umuezeoka, Oriuzor, Umuoghara, Amaekka, and Amaezekwe, all in Ezza communities; Izzi, Ezzamgbo, and Effium. These are the people who would have been in the current Ebonyi State, but for the fact that the Nigerian government then divided them into Benue in order to stifle the population.

If you were to count the number of Igbo-speaking villages in Benue State outside of Umuezeokaoha, you would be talking about a total of more than 600 villages, aside from the Ezza-speaking tribe, particularly the people of Umuezeokoha who have more than 300 villages.

The Igbo-speaking region of Benue is home to three of the province’s largest marketplaces.

20) The Eke Avurugo community, which includes the Nwajala, Umuoye, Ubulie-Umuez, ozara, and Umuoye among many others, are the indigenous Igbo-speaking communities in Kogi state, particularly in the Ibaji and Igalamela/Odolu LGAs.

Oba Adeyeye Enitan Ogunwusi, Ojaja II, the current Ooni of Ife, also shared with us that the Igbo (PLEASE KINDLY NOTE THAT HE WAS NOT REFERRING TO THE UGBO OF ONDO STATE) initially conquered his kingdom before Moremi saved them, and that the Igbo aboriginal community still exists in ILE Ife to this day.

The Ugbo people of Ondo State share an Obatala connection with the indigenous population of Ile Ife.
Note that Ugbo is the name of various Igbo towns in contemporary Igboland.

For example, Ugbodu in Delta State and Ugbo in Enugu State are only a couple.