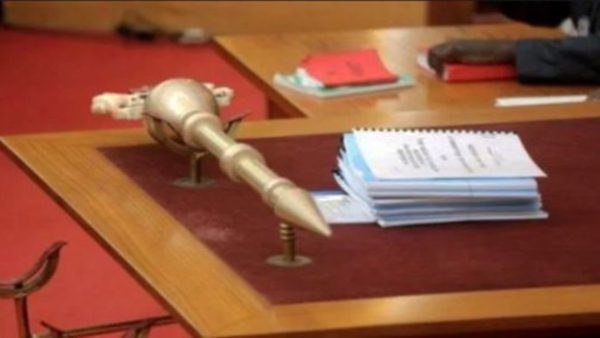 The abrupt disappearance of the Assembly Mace yesterday caused a commotion at the Ogun State House of Assembly that led to the suspension of its session.

According to Anaedoonline.ng, this is the second time the official seal has been reported missing while the Speaker, Olakunle Oluomo, is in hot water.

This site had previously reported that Oluomo was arrested by agents of the Economic and Financial Crimes Commission, or EFCC, and is currently facing charges before a Federal High Court in Lagos.

The speaker was detained due to suspicions of fraud, corruption, and financial wrongdoing.

On Thursday, there were attempts to remove the troubled speaker in his absence.

According to sources, the incident resulted in the theft of the mace, the state’s legislative branch’s staff of power.

According to Anaedoonline.ng, the House was supposed to convene its plenary session at the Assembly premises yesterday, but the Mace was stolen, preventing the lawmakers from completing their goal of impeaching Oluomo.

The mace was found by the Lagos Police Command in the Abule Ado Area of Lagos State after it was initially reported missing in December 2020.

9 Things You Need To Know About The New Deputy Senate President, Ovie Omo-Agege

Additionally, it should be noted that the Ogun State lawmakers will be absent from the plenary for the third time in a row as a result of the Speaker’s detention last Thursday.

According to Newsmen, security personnel stationed at the assembly complex as of 2:00 PM yesterday were still requesting that journalists acquire permission from the Head of the Assembly’s media, who would not return his calls.

However, a source close to the Assembly who spoke to newsmen on the condition of anonymity claimed that the Mace had vanished from the complex in order to prevent the lawmakers from presidencing, including the Speaker’s impeachment, in particular the Assembly’s Deputy Speaker, Mr. Akeem Balogun, who is tasked by statute with running the Assembly’s business.

He claims that at least 16 parliamentarians have already signed a petition to impeach the troubled Speaker.

However, several politicians who were reported to be Oluomo’s allies allegedly plotted to have the drill cancelled and relocated the Mace away.