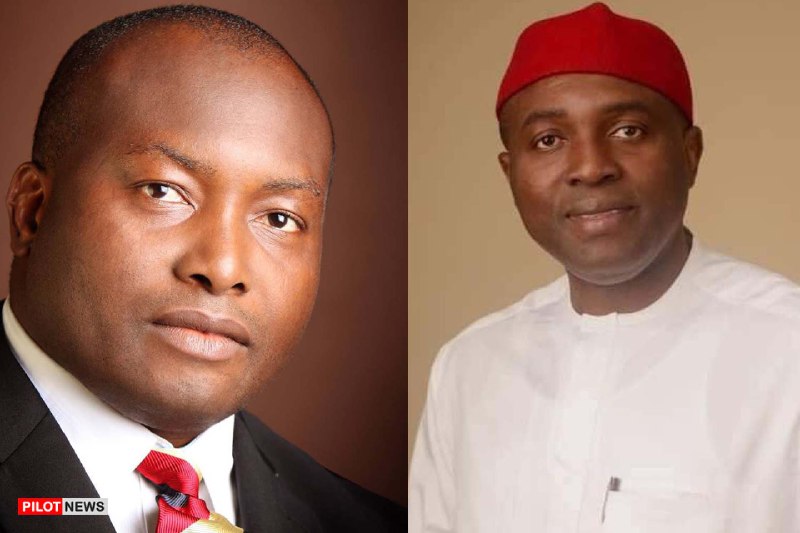 Anambra South senatorial contest in 2023 is not going to be a usual contest, just like the Anambra North senatorial race. In Anambra South, the contest is squarely between Sen. Ifeanyi Ubah the incumbent senator for the zone, and Hon. Chris Azubogu, the incumbent House of Representative for Nnewi North, Nnewi South, and Ekwusigo Federal Constituency. By next year, Hon. Chris Azubogu would have completed his third term in Nigeria’s House of Representatives, and he is a well-recognized name in Anambra’s political space. Sen. Ifeanyi Ubah on the other hand has enjoyed nearly one decade and a half of relevance in Anambra’s political space and beyond.

Ifeanyi Ubah who just clocked 51 years was announced, through unprecedented publicity about eleven years ago, when he clocked 40 years. Before then, he has been involved in Anambra politics at a different level. For instance, in 2007, he played a role in the ‘election’ of Andy Uba, who was sacked by the court barely two weeks after he was sworn in as governor of Anambra State. Ifeanyi Ubah has sought to be Anambra’s governor since 2010 except in 2017 when he joined the campaign for the reelection of the former governor, Willie Obiano. Chris Azubogu had only sought to be governor in 2021 but failed to secure his party’s ticket and later was said to have joined and worked for the APC.

Sen. Ifeanyi Ubah has made a tremendous investment in Anambra’s social space to the extent that many people associated with other politicians have worked with him in the past. In fact, it is hard to be in a gathering of Anambra’s influencers and not find someone who has worked for Ifeanyi Ubah before. The problem is that he does not maintain his team and so many of them end up leaving him. Many of these people who are mostly young people in their 20s and 30s had their first international travel experience on Ifeanyi Ubah’s account. Some had their first cars on his account, among others. It is therefore fair to posit that Ubah’s huge investment in people is a major reason he is a factor in the 2023 Anambra South senatorial election. Towards the 2019 General Election, many APGA leaders left APGA and joined YPP with Ubah and they are still with him. Ifeanyi Ubah simply speaks the language of our politics and has been around for a while making valuable investments in people; giving money as though he has no use for it which literally sweeps people off their feet, he has managed to create a spot for himself right at the centre of our politics.

Hon. Chris Azubogu on the other hand is reputed for his tangible representation. By this, I mean his ability to attract infrastructure to his constituency and beyond, as a member of the House of Representatives. Chris has through dedication and focuses on the infrastructure gap in Anambra state, carved a spot for himself. In Anambra State today, there could be no argument as to the claim that Chris is the most hardworking House of Representatives, member. In fact, some of his admirers say he is the most hardworking House of Representative member from the Southeast. This is subject to debate. However, what is undisputed is that he is hard working and has made an impressive mark which is his major strength in the coming senatorial election next year.

A look at the intrigues ahead of the 2023 Anambra South senatorial election, Sen. Ifeanyi Ubah’s main challenger, Hon. Chris Azubogu has the backing of a foremost businessman who supported Sen. Ifeanyi Ubah to the senate, in 2019. For Hon. Chris, it’s an advantage. Every political support is an advantage, more so, one that comes along with some financial addition to the project. But, Sen. Ifeanyi Ubah has built a reputation as a difficult person and perhaps, disrespectful to some established businessmen and professionals. In contrast, Hon. Chris has built a reputation as a humble and harmless servant. These may not be a reality in any case, but in life, perception is usually stronger than reality. Mostly, while Ifeanyi is seen as the loud one, Chris is seen as the gentleman. Would these translate to electoral victory? It is left to be seen.

Sen. Ifeanyi Ubah has a serious advantage with his support base, whose language he speaks. The average person in Anambra State or in Anambra South does not concern his or herself with disagreement among wealthy people. In Nnewi, most people do not care about any issue between Ifeanyi Ubah and Chief Ibeto; it is just not their business. Therefore, Ifeanyi Ubah is firmly in the good books of real voters. The import of this is that by casual observation as of today, Ifeanyi Ubah is apparently positioned to have more votes in the election in Nnewi and environs, and that will give him a natural advantage. Azubogu’s support base is drawn mostly from the professional class and some of the elites that are easily outnumbered.

In the final analysis, Sen. Ifeanyi Ubah and Hon. Chris Azubogu are the two main contenders for the Anambra South senate in 2023. Clearly, both are standing on different pathways to victory. Hon. Chris Azubogu would need all the support he can get from powerful people, all the funds he can mobilize, and all the votes these would translate to. Sen. Ifeanyi Ubah has longstanding goodwill and may only need to maintain the status quo which is clearly not going to be easy, as this election evidently, is squarely about retaining power, anyhow one may decide to look at it.