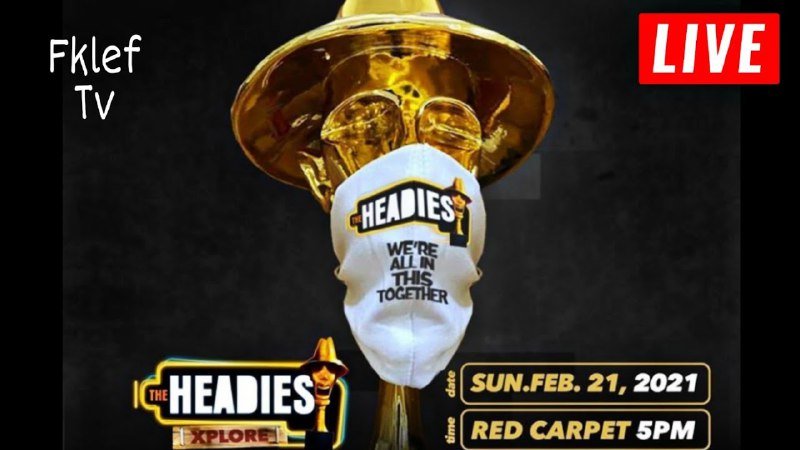 The 2022 Headies Awards event, which was hosted at the Energy Performing Arts Centre in Atlanta, Georgia, United States, has received mixed reviews.

The 15th edition’s organizer hosted the exhibition outside of Nigeria, in contrast to prior years.
Anthony Andersen, an American performer, and Osas Ighodaro, a Nigerian actress, served as the event’s hosts.

The event this year, dubbed “Join the Movement,” honored great accomplishments in the Nigerian music business, although there was widespread disapproval of the country’s hosting.

The top Headies winners were Grammy-winning singer Burnaboy, Wizkid, and Tems, while BNXN FKA Buju won the Next Rated category and left with a Bentley.

Some Nigerians, who disapproved of the decision to hold the award ceremony in the US, claimed Anthony Andersen, the American host, was unapproachable.

Others who disagreed with the choice of Andersen questioned why other Nigerian hosts, such as Bovi or Basket mouth, were not given the chance to present the illustrious event.

Here are a few responses:

@_AsiwajuLerry on Twitter said, ”We have an outstanding and funny host like Bovi and you’re letting this dry brother host with Osas?? God will judge you Headies.”

@itzbasito, “Walahi, Bovi or Basketmouth would have done a better job than this guy. Not that he’s not good but he’s finding it hard to connect with the audience.”

@ilevs, ”It is just like saying Bovi is cracking Naija jokes to US citizens,they might not laugh because they don’t understand the type of our jokes, not that he is not funny. Every comedian knows what can make their citizens to laugh, that’s just the situation Anthony is in now.”

@DanielRegh, ”Headies’ nominees shouldn’t attend the event, anyone who’s smart will turn down the award even if they win cos attending or accepting the award is disgraceful. Imagine hosting one of Africa’s biggest Music awards in another continent. This is why foreigners keep underrating us.

@abelpter, ”Anthony Anderson and Osas Ighodaro would be hosting the 2022 Headies awards. I honestly still don’t understand why the Headies award is being hosted in the US. That’s something no other African country would do. The Nigerian Obsession with Foreign/ American validation is insane.”

@Felix_Onyemaech, ”Headies took Nigeria’s biggest music award show to Yankee. One of the most unintelligent decisions I’ve seen. This is why Burna boy say they don’t rate us.”

On why the award was taken to the US, Headies founder, Ayo Animashaun told Billboard that ”Over the years, the Afrobeats artists have grown, they’ve evolved. They’re no longer local champions. They sell out concert venues around the world, from Madison Square Garden to [Atlanta’s] State Farm Arena. Afrobeats is not just about our own music anymore.

”We need to take center stage, where there’s so many artists doing Afrobeats that nobody’s gonna see if you do not create opportunities like this. There’s so many now that a lot of people don’t know yet, and they are so talented.”

However, one of the organizers who requested anonymity bemoaned that the majority of showgoers were dissatisfied.

Recall that Wizkid, Burna Boy, and several others did not attend the event.

According to the source, some artists were unable to attend in person due to either visa complications or other commitments.

He claimed that if the event were hosted in Nigeria, artists with competing commitments would often make time to attend.

”Some will have other events the same day, and will attend both, but in the case of the US event, they were unable to do that. This frustrated the event,” he said.

He added that many artists found it difficult to attend the event because of logistics issues as it is not easy spending so much for a US trip amid aviation fuel price hike.

“You know that international travels are quite expensive now. Many who should ordinarily attend couldn’t make it.

“People make events. Award plaque doesn’t make events, even journalists who were to cover the event could not make it and that was not good for the publicity,” he added.

In response to the criticism, however, Moji Danisa, a well-known entertainment analyst and publisher of Paparazzi, told Newsmen that: “The Headies, which were hosted in the USA, is not a horrible idea.
Nigerian music is played almost everywhere in the world, including nightclubs.

”We have Nigerians in the diaspora who will also want to witness the headies, and also there are a lot of Nigerians in the US. Music sells and the world is looking for different beats and they have embraced Nigeria, look at Burnaboy, Davido, Wizkid, Kizz Daniel, they are all doing well. It is not out of place to take it out of Nigeria. It could be taken to Germany, Uk. It is exposing our stars and music and exporting our culture, traditions and dance. I think I will like to congratulate the organizers for that initiative.”

Headies Awards: Why I Stopped Entering For Awards – Vector

Myke Pam, a musician and partner of Lakreem Entertainment Inc. as well as a friend of Eedris Abdulkareem, praised the organizers for their endeavor.

He claims that the exposure will help the Nigerian music industry and present prospects for partnerships and increased sales.

He told Newsmen that, ”The Headies did something quite commendable. The indigenous music industry of Nigeria is taking away the airwaves all over the world. You can see that through the recognition, through the awards and massive impact our music is making in the world.

”It is a big markup for Headies to be held in the US. It is a global brand, Afro beats as a music genre is a global brand that should be consumed, appreciated and loved by all. The US still remains the best in entertainment and if you can have a successful event there and a well-rounded media coverage, that is a big deal. I must commend the Lagos government for helping to achieve that dream, it is the beginning of a bigger picture. It is just like the thumbnail of a bigger billboard. It is wonderful.

” I know a lot of people will benefit from such exposure and have opportunities for collaborations and more business opportunities. That is good for the Nigerian economy, since some things seem not to be working in the administration, if entertainment is going to be feeding us and giving us some hope for a brighter tomorrow, it is worth celebrating.”