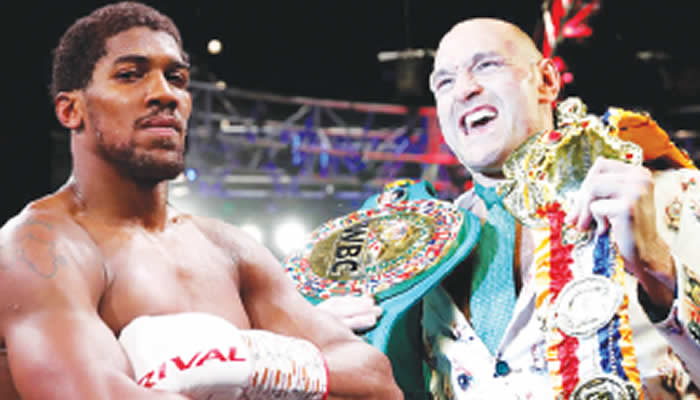 Anthony Joshua’s camp have revealed that they have accepted the parameters given out by Tyson Fury’s management ahead of a potential all-British mega bout on December 3.

On Tuesday, Joshua’s 258 Management and Matchroom posted on social media that they had suspended communication as a because of Queen Elizabeth II’s demise and were now waiting for a response.

“258 and @MatchroomBoxing can confirm, on behalf of @anthonyjoshua, that we accepted all terms provided to us by Fury’s camp for a fight on December 3rd last Friday,” the statement stated.

It was decided to stop all communication in light of the Queen’s demise.

“We are awaiting a response.”

Frank Warren, Fury’s promoter, has since replied, “Contract will be with you very soon.”

Fury recently challenged Joshua to a long-awaited showdown and offered the two-time world champion a 60-40 purse after it emerged a prospective undisputed clash against Oleksandr Usyk would likely have to wait until 2023.

The 34-year-old initially highlighted November 26 at Wembley or December 3 at Cardiff as potential dates for the fight.

The Gypsy King marked his UK homecoming with a sixth-round knockout win over Dillian Whyte at Wembley in April and preceded to reiterate plans to retire before informing the WBC he intended to resume his career at the end of last month.

Joshua and Fury had been set to fight in August 2021 before plans were scuppered by an arbitration judge ruling that Deontay Wilder was contractually entitled to a third fight against Fury, which the American heavyweight would go on to lose by 11th-round knockout.

A rematch with Dillian Whyte had emerged as a possibility down the line for Joshua following his defeat to Usyk, while Fury was recently challenged by 37-year-old former WBA regular champion Mahmoud Charr. The aftermath of Fury’s victory over Whyte had also seen him express his interest in a potential crossover bout against UFC heavyweight champion Francis Ngannou, though that was at a time when the former had been adamant he planned on walking away from the sport.

Fury has no mandatory challengers in place as it stands, with former world champion Wilder, No 1 in the WBC ratings, scheduled to face Robert Helenius in an eliminator and No 2-ranked Andy Ruiz Jr coming off a hard-fought win over Luis Ortiz.