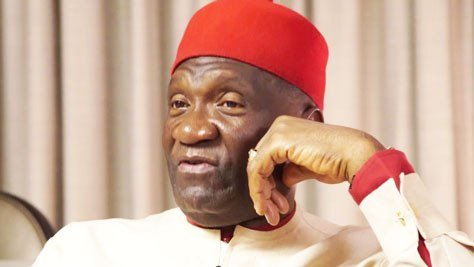 Chief Nnia Nwodo, a former President-General of the apex Igbo socio-cultural organization Ohanaeze Ndigbo, has been accused by the leadership of the Indigenous People of Biafra (IPOB) of being behind the South-security East’s challenges.

According to Anaedoonline.ng, the group’s Director of Media and Publicity, Emma Powerful, stated this in a statement on Wednesday, alleging that Nwodo socialized with the northern oligarchy.

Emma accused Nwodo of bringing terrorists disguised as herdsmen into the region during his tenure as President-General of Ohanaeze Ndigbo, claiming the motivation was his governorship ambition.

He also claimed that Nwodo’s evil romance with those terrorizing the South East stems from his desperation to prove to his Fulani masters that he is a willing tool, and that his reign heralded the arrival of killer herdsmen into the region.

The statement partly reads, “We, the global movement and family of IPOB, under the leadership and command of the indefatigable Liberator, Nnamdi Kanu, wish to state unequivocally that the security architecture of the South-East region was destroyed during the regime of the former President-General of Ohanaeze Ndigbo, Chief Nnia Nwodo.

“IPOB and Biafrans must understand that Nnia Nwodo of Enugu State was among those who brought terrorists masquerading as herdsmen into our region during his regime as Ohanaeze Ndigbo’s President-General. He did this to placate the Caliphate, because he was nursing the idea of becoming Governor of Enugu State.

“In desperation to prove to his Fulani masters that he is a willing tool and a useful idiot, Nnia Nwodo publicly boasted that he will fight IPOB struggle and will do anything to sabotage Biafra Independence (this statement went viral).”