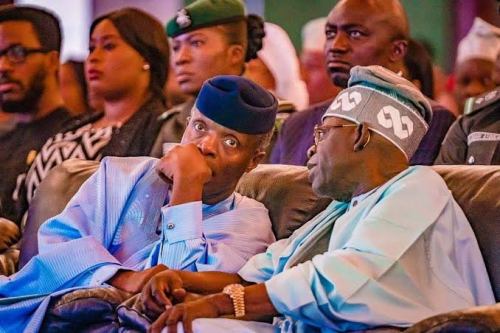 Remilekun Usman, a supporter of Bola Tinubu’s campaign for president of the All Progressives Congress, has tasked Vice President Yemi Osinbajo and Minister of the Interior Rauf Aregbesola with publicly endorsing him.

Usman urged the vice president and the minister to put their differences behind them in a statement that was made public on Friday.

He questioned why Tinubu’s political heirs Osinbajo and Aregbesola were silent about his goal.

Usman claims that the two, who are from Yorubaland, are anticipated to back the area’s president Tinubu.

In order to assist Tinubu, he urged Osinbajo and the outgoing governor of Osun State to put their issues behind them.

Usman warned Osinbajo, Aregbesola, and other disgruntled members of the ruling party in the statement to urge their supporters to support Tinubu’s bid for the presidency.

He begged the party not to be split going into the general elections of 2023.

Usman urged sincere party reconciliation and added that after President Muhammadu Buhari’s term ends in 2023, the Yoruba must assume power.