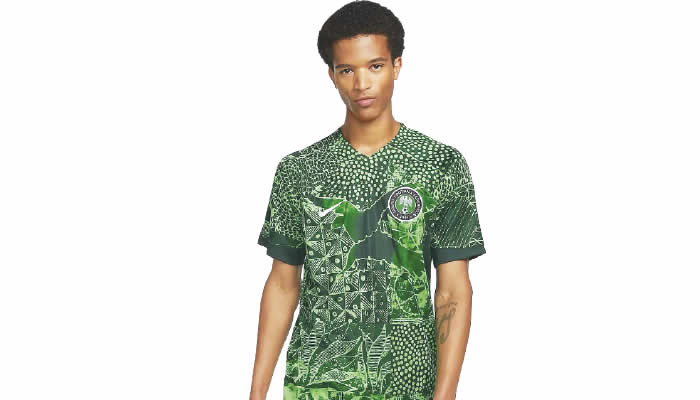 Reactions have followed the debut of Nike’s new Super Eagles shirt on Thursday, according to ANAEDOONLINE.NG.

The home jersey is all green with eagle decorations, while the away jersey is white with a green neckband and green shorts.

Fans of the three-time African champions took to Twitter to express their displeasure and unhappiness at the design by Nike.

Afolabi Abayomi wrote on Twitter @Affoo76, “Nike have stared tie and dye for our jersey? This green colour isn’t appropriate at all.”

Ghana’s national team football fan page also took a swipe at the jersey, posting beneath the pictures, “Is this punishment for not qualifying for the world cup… Very ugly kits.”

Onuoha Udochukwu added, “If the plan is to irritate opponents so that they don’t mark our players, I think this is the perfect jersey for the job. As we did not qualify for the World Cup in Qatar, now we have a talking point.”
Elaigwukings Elaigwu, @elaigwukings also believes the home kit is the worst in history.

“The home kit is worst, it look more like Aso-ebi uniform.”

“Ilesanmi Ayodeji added @IlesanmiayoO, “Are there no Eagles players available to model in this new jersey? I think something is wrong with the NFF. Is this how the Portuguese or the German national team unveils their new kits without their players? This rubbish must stop.”

While David Clinton @8_TrigramCFC loves the away kit, he expressed displeasure at the home kit.

“The white kit is lit but the green looks like an Ankara.”

The Super Eagles are expected to wear the new kits during the international friendly against the Desert Foxes of Algeria on September 27.

Obidients Will Have Mental Trauma After Losing 2023 Election – Fani-Kayode