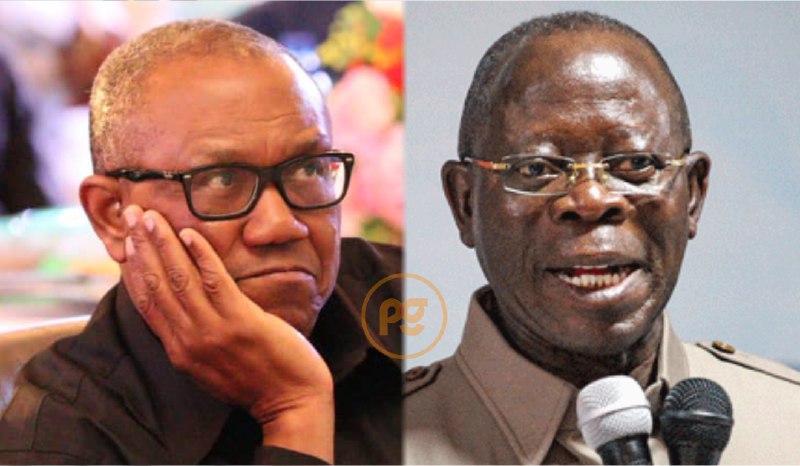 Adams Oshiomhole, a former national chairman of the All Progressives Congress (APC), has come under fire for his most recent attack of Peter Obi, a presidential candidate for the Labour Party (LP).

Oshiomhole was charged with using Obi’s popularity as leverage in his pursuit of importance.

When Obi was the governor of Anambra State, the former APC National Chairman chastised him for failing to address the issue of insecurity.

Speaking at a youth summit in Abuja, Oshiomhole said that Willie Obiano, the outgoing governor of Anambra State, had made significant progress against insecurity because Obi had failed to do so during his administration.

He recounted how Obiano demolished kidnapper hideouts in Anambra State after becoming government.

Oshiomhole claimed that the houses demolished by Obiano’s administration were used by Bakassi Boys.

“Who was the governor when Bakassi developed, and who solved the problem? So, if a man could not solve a security challenge in his own state, which requires courage. How can he convince you that he will solve security challenges all over Nigeria?

“Don’t take it from me, go to Youtube and find out the first six, nine months of Governor Obiano and ask yourself, who was his predecessor? It will tell you it’s Peter.

“If he has solved the security problem, will Obiano be using bulldozers to demolish houses of kidnappers, Bakassi boys, Bakassi girls, bandits?”

In a statement, the organisation made this claim under the signatures of Hajiya Maryam Mohammed, director of internal security research, and Dr. Oshioke Mathew Afegbua, national coordinator.

Oshiomhole is frantically seeking political significance, the group warned Nigerians, so they should be cautious of him.

The statement reads: “Oshiomhole is the least politician in Nigeria to denigrate Peter Obi, who has become Nigeria’s most popular choice for the coming general election.

“We have not forgotten that as a governor, Oshiomhole ran Edo like a tin-pot despot on the matrix of empty populism.

“Oshiomhole helped to impose the fading APC administration on Nigerians.

“Under this administration, human lives have been reduced to nothing. The country has become an abattoir where human beings are helplessly being slaughtered at will.”

The group urged Oshiomhole to apologize to Nigerians over the pains he caused them.

“We urge Oshiomhole and his party to apologize to Nigerians for the pain they have put them in, instead of talking down on the most popular presidential candidate in the history of Nigeria,” it further said.