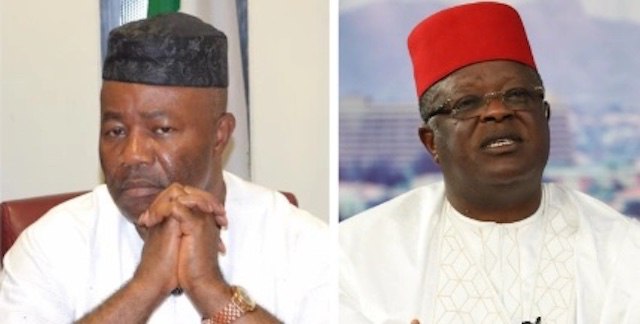 The Independent National Electoral Commission (INEC) has revealed the criteria by which the Ebonyi governor Dave Umahi, the former Niger Delta affairs minister Godswill Akpabio, and other candidates were included on the final list of senators qualified to run in the general election of 2023.

According to an earlier report by Anaedoonline.ng, INEC made the list, which included each candidate’s name, party affiliation, level of education, and age, public on Tuesday in advance of the election season.

INEC clarified that it released the list in accordance with the requirements of the Electoral Act 2022 in a statement by its spokesman, Festus Okoye.

The All Progressives Congress (APC) candidate for the Ebonyi South Senatorial District, Governor Umahi, was identified by the electoral agency in the list.

Due to the controversy surrounding their victory in the senatorial primary elections, both candidates had previously been left off of the list of contenders that had been published earlier in June.

Tuesday, INEC clarified the situation by claiming that the court ordered it to publish the identities of Akpabio, Umahi, and a few other previously unrecognized candidates.

The information was revealed by INEC in the notes section that was included with the final list of national candidates qualified to run in the general election of 2023.

According to the commission, Ogbede Omoregie (PDP, Edo South), Ugbome Pascal (PDP, Edo North), Onolemenmen Ozeigbe (PDP, Edo Central), and Rimantari Joshua are among the senatorial candidates whose identities were ordered by the court to be published (Labour Party, Taraba South).

The name of Akpabio as the APC candidate for the Akwa Ibom North-West District in the 2023 elections has to be accepted and published by INEC, according to an order from the Federal High Court in Abuja.

APC primary, which the former governor of Akwa Ibom claimed to have won, was not monitored by the commission, which is why it had previously refused to recognize Akpabio as a candidate.

While his younger brother, Austin Umahi, won the party’s Ebonyi South senatorial primary in May, Umahi had run for the party’s presidential primary but lost to Bola Tinubu.

The governor ran unchallenged in the repeat primary when the younger Umahi stepped down for the position following the primaries, but the commission declined to recognize him as a contender and instead to leave the position open.

In order to force the electoral authority to recognize his name as a candidate for the party, the governor filed a lawsuit against INEC at the federal high court.

However, Ann Agom-Eze, who finished second in the first primary, joined the lawsuit and urged the court to recognize her as the party’s candidate.

However, in his decision, Justice Fatun Riman ordered a new primary, in which Mrs. Agom Eze and any other fresh candidates who expressed interest might run.

Agom-Eze appealed the verdict to the Enugu Court of Appeal after being dissatisfied with the decision and requested a stay of execution.

As a result, the APC in Ebonyi received permission from the Federal High Court to hold the primary, which Umahi won despite the ongoing appellate court case.