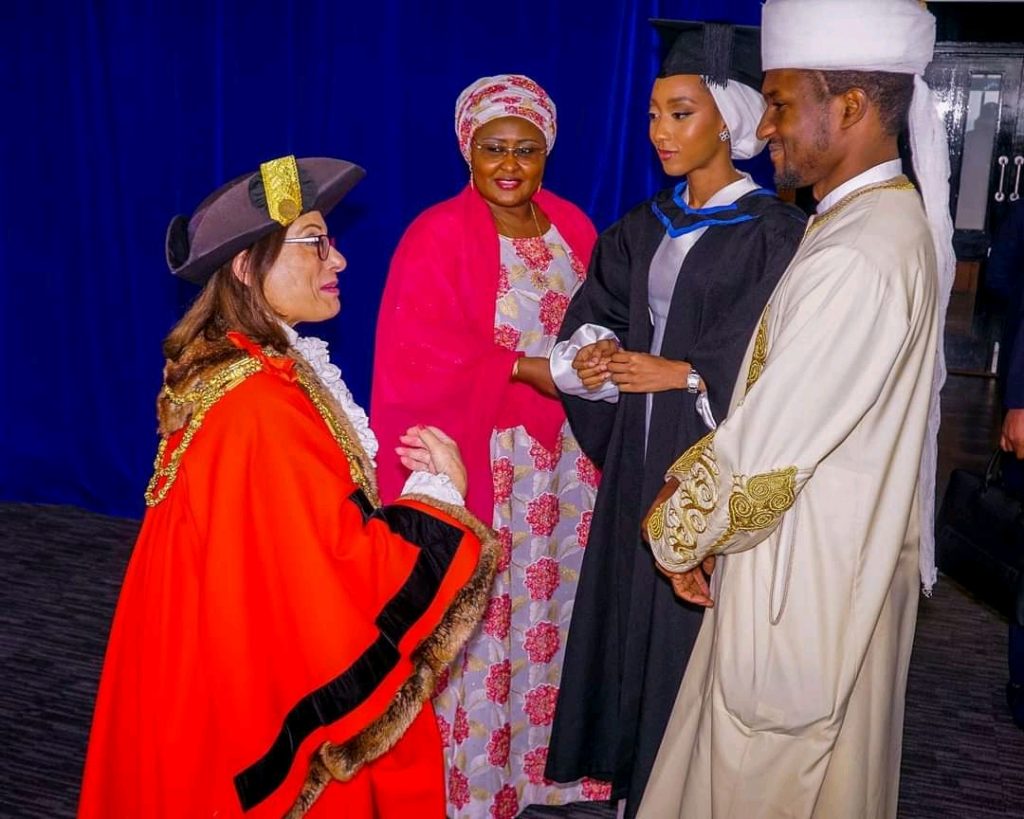 Aisha Buhari has come under fire from the Human Rights Writers Association of Nigeria (HURIWA) for attending her daughter-in-graduation law’s from a university in the United Kingdom while the Academic Staff Union of Universities (ASUU) is still on strike.

HURIWA asserts that the First Lady’s actions were insensitive and heartless, and that she ought to apologize to the parents and pupils of Nigeria.

According to HURIWA, Aisha Buhari was celebrating her daughter-in-graduation law’s from a British university in front of the helpless Nigerian university students who had been absent from their classes for more than seven months due to the President Muhammadu Buhari administration’s failure to address the needs of lecturers at public universities when ASUU members began their strike on February 14, 2022.

Comrade Emmanuel Onwubiko, the National Coordinator of HURIWA, called Mrs. Buhari’s action “insensitive and profane” in a statement and demanded that she apologize to the millions of Nigerian students and helpless parents because her action was a slap in the face and showed disregard for their feelings and circumstances.

“Congratulations to Mrs. Zahra B Buhari on your graduation with First Class Honors in Architectural Science. Wishing you all the best!” the President’s wife had captioned photos of her son’s wife on social media on Tuesday.

“Her comments come amid the seven-month industrial action by ASUU over FG’s blatant failure to meet its agreement with the poorly paid lecturers.

“Of note, since May 29, when Buhari came into office, lecturers in universities, polytechnics, and colleges of education have embarked on over 900 days of strike.

“But amid ASUU incessant strikes, politicians and government officials school abroad and send their children to study in prestigious schools overseas. As though that is not enough, they will rub it on the faces of the poor and stranded on social media by flaunting their photos. In July this year, the House of Representative Speaker, Femi Gbajabiamila, posted a picture of himself while in class at Harvard school.

“Just recently, the Minister of Education, Adamu Adamu, said there is nothing wrong with Nigerians seeking university education abroad if they can afford it.

“However, how many Nigerian parents can afford the escapist mode of foreign education for their stranded wards and children amid the seven-month-long ASUU strike?” Onwubiko asked.

“Mrs Aisha Buhari displayed the highest form of insensitivity and flagrant disregard for the Nigerian student with her post on the graduation of her daughter-in-law. Everything about her action is wrong and smacks of profanity not at a time when students are protesting ASUU strike and blocking roads and airports all over the country over their continued stay at home whilst the government led by Mrs Buhari’s husband have been aloof and not shown commitment to solve the crisis. Mrs Buhari must apologise to Nigerian students and parents forthwith for such irresponsible comment.

“The elite, it is obvious, is Nigeria’s number one problem. It is perplexing that the President’s family and the elite are running abroad to enroll their wards when they have watched the educational sector in Nigeria collapse wobbly and totally even when they have the onus and resources to avert the disaster and improve the sector.

“In March 2022, the House of Representatives again rejected a bill to prohibit public officials from sending their children and wards to schools abroad without approval of Minister of Education.”

Legislators initially submitted the bill in 2018, which was supported by Sergius Ogun (PDP, Ogun), but rejected it. This law needs to be reintroduced in order to put an end to the elite’s abhorrent and reckless behavior.