Lampard Says Iwobi And Everton Are In…

Chambers Of Commerce Calls On Government To…

2023: APC Tackles Ngige For Refusing To…

Lampard Says Iwobi And Everton Are In Contract Negotiations 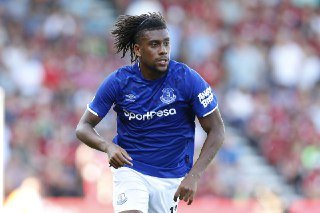 According to ANAEDOONLINE.NG, Everton manager Frank Lampard has confirmed that the English Premier League club has started contract negotiations with Super Eagles midfielder Alex Iwobi regarding an extension of his contract.

Since Lampard took over the club last season, the Nigerian international, whose contract expires at the conclusion of the 2019–20 campaign, has been in excellent form for the Toffees.

Toward the end of the 2021–2022 season, Iwobi significantly contributed to Everton avoiding relegation from the English top flight of football.

This season, he continues to be a top performer for the club and has been deployed in a new midfield role by the former Chelsea player.
The 26-year-old has once again excelled in his new role and has been massive for the Merseysiders, having a hand in four of their eight league goals.

His performances have drawn praise from the individuals and the club faithful with former Manchester United players Owen Hargreaves and Rio Ferdinand the latest to praise the Nigerian.
Former Nigeria international and uncle to the in-form player, Austin Okocha, and even Lampard were among those who have showered encomium on the former Arsenal player.

With just a year left on his running contract, reports of contract talks between the club and the player have emerged with Lampard on Thursday confirming the reports.

“Yes, I know that Thelwell’s speaking with Alex’s people on that front,” Lampard told Richard Buxton, as per Fabrizio Romano.

“We will see how that one develops.”

With Iwobi’s impressive form, Everton would do everything possible to tie him down for a few more years.

UPDATE: Igbos Are Not Like Those Killing My People – Gov Ortom

Echezona obinnaOctober 14, 2022
Another great offer for you

APC Governors Who Attended Meeting Between Tinubu And Stakeholders Revealed