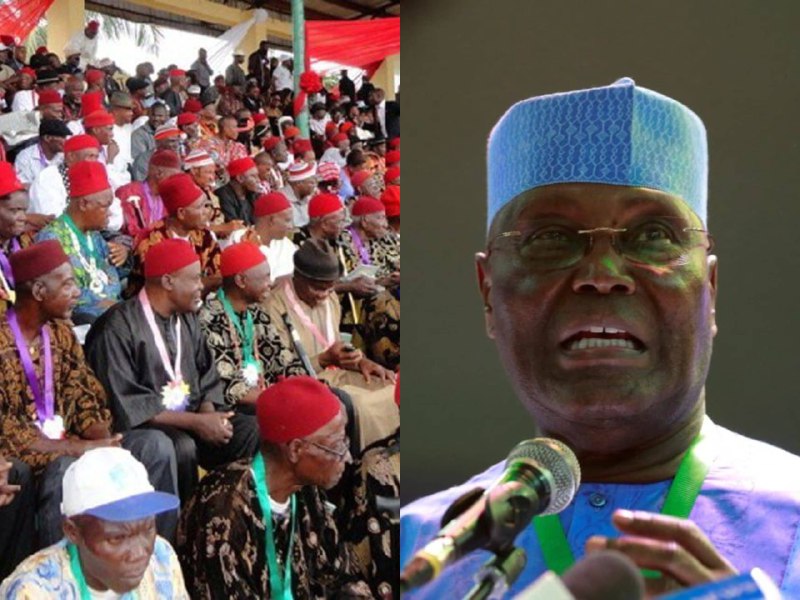 The Peoples Democratic Party’s (PDP) Atiku Abubakar has received a stern warning from the top Igbo sociocultural group, Ohanaeze Ndigbo, ahead of the 2023 presidential elections.

The group advised Atiku to abandon any dreams of garnering a sizable South-East vote in the federal elections in 2023.

The group warned the PDP presidential candidate not to “squander his time and resources for any cause in the South-east and Igbo-speaking communities of South/South and Middle belt” in a statement released on Tuesday by Mazi Okechukwu Isiguzoro, the organisation’s Secretary-General.

He told the Waziri that people gathered around him from the aforesaid region were only doing so for money gain.

After receiving their support in 2019, Atiku betrayed the Igbos, according to the Apex Igbo group.

They said that because of the announcement he made in Kaduna, the former vice president would be unable to amass the 25% of votes required by the constitution.

The group said, “our people gave Atiku all the support in 2019 but shortly after the election, he abandoned them to their fate only to return four years later.

“Now, he has even come openly to say he is merely a Northern candidate. He should know that all those flocking around him are doing ‘Yahoo-Yahoo’ to him.

“Igbo political elites, including the PDP Governors, know that Atiku will lose in the Southeast without getting the required constitutional 25% votes after his infamous Kaduna declaration that he belongs to the North only.

“Nigerians from the North, West, South, and East are encountering severe hunger, unemployment, and insecurity challenges. Any Presidential candidate dwelling on ethnicity and religious cards, without showing evidence of rescuing the country from the abyss of economic crisis and social dilemma Nigerians found themselves, will be disgraced at the polls.

“What Nigerians need now is someone who will unify the entire country, not a sectional leader like Atiku.”