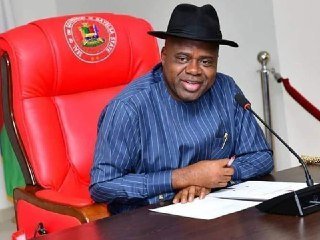 Major General Muhammadu Buhari (ret.), the President, has been urged by the Governor of Bayelsa State, Mr. Douye Diri, to consider providing the state government with “special grants” in order to lessen the devastating effects of the state’s catastrophic flood disaster.

In light of the dire situation, he instructed all state employees—aside from those performing essential duties—to take a one-week vacation from work.

Diri, who made the appeal while addressing residents of the state in a state-wide broadcast on the perennial natural catastrophe on Tuesday morning, said “economic hardship has set in.”

He suggested that the special grants to Bayelsa should be sourced from the Stabilisation Fund, Ecological Fund and the Natural Resources Fund.

Diri, who has been on tour of affected communities, many of which are submerged, said that the overwhelming devastation of the flood was beyond what the state government could handle alone.

The governor said, “I wish to thank Mr President and Commander-in-Chief of the Armed Forces, Muhammadu Buhari, for his kind directive to the different federal agencies to come to assist the state. I urge them to comply with the presidential directive expeditiously.

“Without exaggeration, the share scale of the devastation is not such that the state can handle on its own. We urgently solicit the support of multinationals, international donor agencies, the Red Cross, Diplomatic Missions and people of goodwill to come to the aid of our state.

“I appeal to Mr President to consider special grants to the state from the Stabilisation Fund, Ecological Fund and the Natural Resources Fund.

“From my personal assessment, the situation is dire. Nearly a million people in over 300 communities have been internally displaced. Unfortunately, deaths have been reported.”
He stated that the sad narrative of destructive disaster and suffering by victims were the same across Sagbama, Ekeremor, Southern Ijaw, Ogbia, Yenagoa, Nembe and Kolokuna/Opokuma Local Government Areas of the state.

Diri further said, “Businesses have been shut, properties lost, farmlands destroyed. We have a humanitarian crisis.

“As I make this address, Bayelsa State is completely severed from the rest of the country as portions of the strategic East-West Road, the sole access to and from the state between Ughelli and Patani in Delta State as well as Okogbe and Ahoada in Rivers State, have collapsed with the high volume of flood waters occupying the stretch.

“Economic hardship has set in as food, medical provisions and energy are now in short supply. The situation is desperate and getting worse.”

According to him, the State Task Force on Flood Mitigation and Management in collaboration with the State Emergency Management Agency had established internally displaced persons camps and been providing relief materials for victims of the catastrophe.

“I hereby direct all public servants, except those on essential duties, to be given time-off from work for the next one week.

“Let me make a special appeal to vendors, particularly of fuel, food, water and pharmaceuticals not to exploit the situation. We must be our brother’s keeper”, he added.

The governor also said he had directed that the distribution of the relief materials should be carried out in a non-partisan manner, stressing that “we are all, first and foremost, Bayelsans.”

He warned miscreants against taking advantage of the vulnerability of residents occasioned by the flood to commit crimes, saying the government had zero-tolerance for criminality.

Diri empathised with all victims of the natural disaster in the state and assured them that his administration would stand by them throughout the process of recovery, adding that he was delighted at the solidarity and cooperation demonstrated by residents to assist one another at this trying period.

VIDEO: Davido Discloses Highest Amount Of Money He Has Spent On Chioma...

Ihedioha’s Aide Reveals What Nnamdi Kanu Court Judgement Will Do In South...